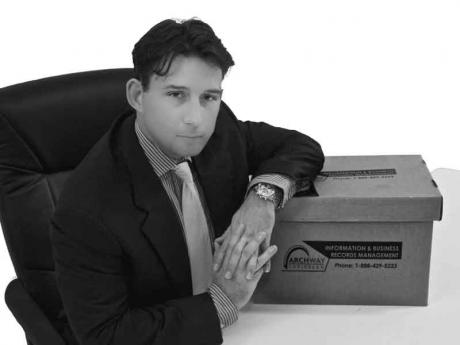 We have all seen, and are living, the trends in office evolution.

Emails, online transactions, and cloud computing are now standard in the conduct of business.

But at least one company is betting its bottom line that the office of tomorrow is likely to maintain some of its past features no matter what common wisdom says.

"The paperless office is a fad ... a myth," declared David Holland.

"At the end of the day, people need to print, and they also need documents," he told Sunday Business.

He and his wife, Fennella Holland-Kennedy, a co-director of the document- storage company, have invested US$2 million over the past 17 months in their start-up business.

Located in Reading, Montego Bay, the earthquake- and storm-proof facility run by the couple has the capacity to store 150,000 boxes of documents in an area which is now 30 per cent occupied with material belonging to 10 entities.

Promising to organise, protect, manage, and recover information, thereby allowing companies to concentrate on core business, Holland-Kennedy and Holland have been making some headway in signing up local companies, in particular those with clients abroad. They are also eyeing government ministries as the next frontier.

Government departments, Holland notes, could save as much as 50 per cent on associated real-estate costs, plus more from improved efficiencies, by outsourcing paper-information storage.

Holland is of British and Jamaican backgrounds.

He returned to Jamaica in 2001 to work in the hotel industry where he met Holland-Kennedy, the daughter of former Caribbean Hotel Association president Ken Holland-Kennedy, who is now deceased.

Holland sees a future of offices papered with documents, but he is not willing to bet all of his money on it.

With an eye to those in the market who have a yen to store their information digitally, the company is also spending US$100,000 on a secure server location to provide imaging and increased e-storage facilities, plus a backup 'store to tape' room.

"We are trying to provide a one-stop shop for protection and access," he said.

Foreign companies that deal with international clientele tend to appreciate the type of service that Archway provides, according to Holland-Kennedy. "Legislation brought in after the Enron scandal has placed increased pressure on businesses in the US to ensure that proper record-keeping procedures are adhered to," she said.

"This legislation makes the directors and employees of companies legally responsible, so in turn, these companies want to make sure their overseas partners also have proper procedures in place."

The couple is seeking a location for another management facility in Kingston which would house a processing room, scanning room, and open-file storage for retrieval for Kingston clients with active files, as well as data storage.

Archway has seen 50 per cent growth in business in the first six months of its second year in business despite having hung out its shingle during the recession, the couple said.

"Records-information management - RIM - is one of the few industries that is recession resistant. Being able to find information quickly keeps businesses efficient and offering better customer service, and keeps them ahead of the game when times are even more competitive," said Holland-Kennedy.

"Both PRISM and ARMA, the two main RIM associations in the US, have reported growth in the industry during the recession."

PRISM and ARMA both list Archway as a member.

Archway Caribbean opened for business in May 2009 after two years of market research into the viability of a comprehensive records-management company by the couple who has worked with several hotel chains."The idea of starting a venture to offer complete records-management solutions came about five years ago from a need we ourselves identified, as well as knowledge of the industry, and encouragement from industry insiders," said Holland-Kennedy.

The Hollands, who have leveraged what they describe as "unique contacts with international RIM experts in both the US and the UK", own the company, along with undisclosed RIM partners domiciled abroad.

The couple says they hold majority stake in the company and that the funds for the start-up were all private equity.

Three-quarters of the US$2 million of start-up capital was spent on constructing the storage facility, with the remainder used for staff and operating cash, the Hollands said.

Archway offers a range of solutions to information-management problems, working with clients to decide what information needs to be scanned or stored. It sets up retention schedules specifically designed for each industry and whatever legal and tax requirements are applicable to storage of specific documents/information.

Each client company is assigned a storage box, secured by bar coding.

Boxes have no company identification on the exterior, save for the bar codes which are only accessed by restricted team members with access to both the facility and the database.

"Walking into the warehouse, no one can tell who our clients are," said Holland-Kennedy.

Clients are charged for storage and document retrieval, with information delivery time - by scan or hard copy or both-promised within two hours.

Archway's turnaround time, Holland claims, is much better than what currently obtains in some local business where a document search can take days.

The company will also destroy unwanted documents, if requested.

Holland says clients have shown great interest in having documents scanned and stored digitally, so he expects a 90 per cent take-up of that service once the technology is in place.

The push to offer a similar service in Kingston has been hampered by ease of access, security, and weather conditions.

"Not being able to find a suitable location in Kingston delayed us starting up earlier," said Holland-Kennedy. "However, we realised we could start with the hard-copy storage and retrieval in Montego Bay, which is where that part of our operation will always be based due to our unique location in terms of security."

At start-up in 2009, the main challenge for the Archway team lay in introducing a completely new concept to the Jamaican business market: that of outsourcing their information to be managed and stored.

Records-information management has been a standard worldwide for over 60 years, says Holland-Kennedy.

"Every First-World government outsources its information to companies such as Iron Mountain. We don't see why this can't be done in Jamaica," she said.

Iron Mountain is said to be the world leader in information-management services, with more than 140,000 organisations in 39 countries on five continents on its client list for storing, protecting, and managing their information.

Looking ahead, the Archway director said, the company foresees demand in Jamaica for not just the typical hard copy and data storage and retrieval, but email management, scanning, and disaster-recovery solutions.

"Companies, especially in the financial sector, cannot afford to be down for even an hour anymore," said Holland-Kennedy.

"So, like international RIM companies, we will be offering clients a complete disaster-recovery centre complete with full redundancy - all in a secure building - so businesses can continue working during times of both civil unrest and adverse weather conditions such as hurricanes."