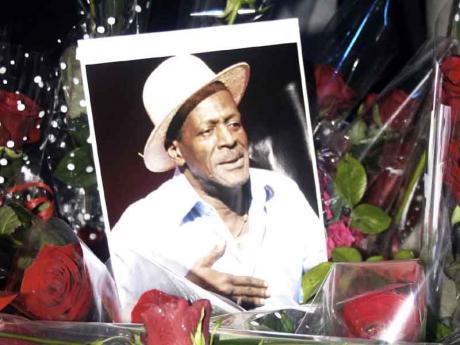 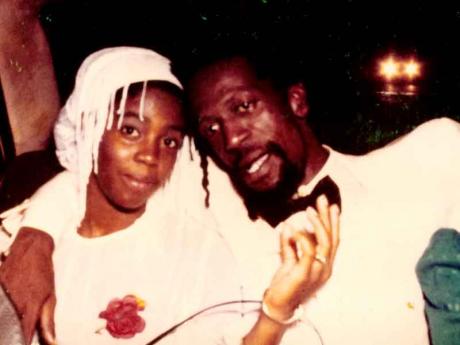 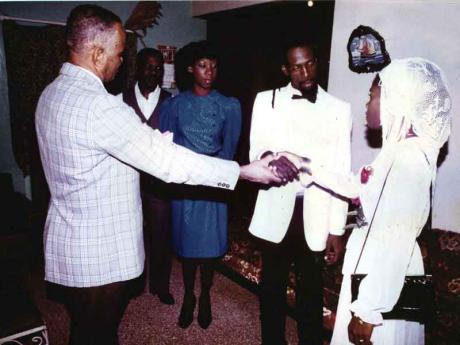 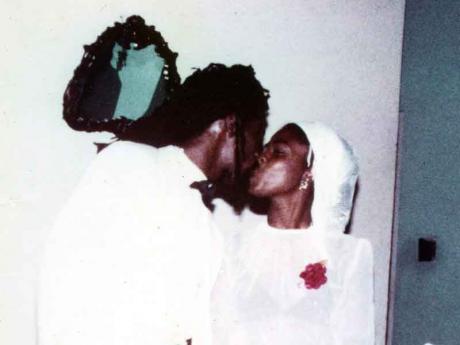 June and Gregory Isaacs share their first kiss as husband and wife on December 1, 1983, three days after he proposed.
1
2
3
4

Her 24th birthday is one June Anne Wyndham will never forget. Her boyfriend had promised a birthday present to top anything she had before and the young woman just could not wait to find out what he meant. However, by midday when no bearers had turned up to surprise her, the thrill was beginning to wear off.

"Find a church," the smiling Gregory Isaacs told his mystified fiancée. When it finally dawned on her that this was a proposal for an on-the-spot marriage, the young woman was ecstatic, her face lighting up at the memory as she shared with The Sunday Gleaner at her St Andrew home.

"We couldn't find a church and it took us about three days, so we were married on December 1, 1983," the still youthful-looking June shared. She remembers that they were married at a church on Three Views Avenue, in St Andrew.

This was the culmination of a relationship that had its genesis four years earlier when young Wyndham, fresh from the country - Fruitful Vale, Portland met the crooner in Randy's Record Shop, on Orange Street, downtown Kingston on a Saturday afternoon. Their eyes "made four" as she and a batchmate went into the store, where he followed them.

He said "hello" and they spoke briefly, as he enquired about where she was from and solicited other relevant information.

"I spoke to him out of fear," she told The Sunday Gleaner. New to Kingston, fresh from the country and hearing so many negative things about Rastas ... that they were 'black heart' men, there was much reservation.

"However, he was smooth, very polished in his approach," she remembers. As the girls boarded the number-36 bus that would take them back to Shortwood College, the Rastaman got into his brown Pinto motorcar and followed the vehicle, stopping whenever it did, all the way to the all-girl institution. There they had their first proper interaction, which set the pace for the adventures to follow.

Country girl that she was, June knew very little about the dapper reggae singer, but was impressed by the consistency with which he visited. As an 'A' student and a key member of the Shortwood Teachers' College athletic squad and netball team, the Portland native soon found herself sneaking out on weekends to watch Gregory as he performed across the island.

By the final year, June was definitely in love, and Gregory had made it clear that she was his woman.

"For me ... Gregory could do no wrong," she said. His presentation of a gold chain with a pendant in the shape of the letter 'J' upon returning from an overseas trip was too much for the girl from rural Jamaica.

Describing him as bossy, June said Gregory never wavered in his insistence that she beat the books. By the end of her final year, they were living together; June recalls that she was having difficulty with learning and drawing various organs of the body, a requirement for her biology course. His skill as an artist served her very well.

He would draw the human skeleton and other organs on cartridge paper and stick them on the ceiling. I would see them when I wake up and before I went to bed, this really worked," she said, smiling at the memory.

"In addition, whenever he went on an overseas trip, he would return with books on psychology because he knew I loved the subject. Whenever I presented a paper, the lecturers were impressed because of all the information that was sourced for the paper ... . All thanks to Gregory and all those books.

That final year was a tumultuous one for the couple, as young Wyndham was sent to teach at a remote school in St Thomas in an effort to separate the couple.

While in St Thomas she decided to stop combing her hair, a decision that had nothing to do with Gregory. This decision also drew outrage from the school administrators. It would be a stern test of their love and commitment, with Gregory taking her to work in St Thomas daily, then he would jam with Bunny Wailer who lived near by, until it was time to take her back home.

This was not practical and the frustrated lovers were soon at their wits end. Although she was excellent at sharing her knowledge with students, school administrators interpreted June's dreadlocks which was always covered, and her different but appropriate dress code as an act of defiance. With only a few months left in her internship, the school wanted her to conform or get out ... Gregory lost his cool, he demanded that she stay home.

For her part, June struggled with the pain of her parents having to deal with the fact that she was a failure. Fortunately, good sense prevailed and she was allowed to complete her internship at Ardenne High School in St Andrew.

June, along with his mom, raised 10 of Gregory's 12 children from other unions which preceded the marriage. She was also instrumental in bringing up his eldest grandson, Orlando, who was with her when The Sunday Gleaner visited. The union produced no children.

At the time of his death, the estranged couple, although no longer living together, enjoyed a very strong, and healthy relationship.

They last spoke in July before Gregory left for England to seek treatment for lung cancer to which he reportedly succumbed.

June learnt about the disease when a friend called to complain that the Cool Ruler had, at the last moment, backed out of a plan to go to Cuba for treatment.

Thinking that she knew about the disease, the friend called to seek her help in finding Gregory.

When she confronted him, Gregory never admitted that his condition was serious, explaining it away as a circulation problem. As far as June is concerned, he was in denial.

He started losing weight, which was the first indication that something was amiss with his health.

At his request, she visited him at home, but he did not want her to see him, he hid behind the door, showing only his face. She recalls that he looked thin.

After a short conversation, June teased him saying, "Imagine mi come fi look fi mi husban an mi caan even si mi husban," they laughed, conti-nued their discussion and she left. That was the last time she saw him.

Gregory was very supportive when June underwent surgery last year, and this brought them closer than they had been in years.

Before leaving for England in July, he told her he was going to undergo surgery. Gregory asked her to take care of Orlando (Mario); he also told Orlando to take care of 'Aunty June', and he told the youngster how much he loved him.

On the Tuesday he was scheduled for surgery she did not hear from him. He finally called on Thursday, from a private number. Without giving any reasons, Gregory told June he would not be doing the surgery, but he was all right. It was the last time they spoke.

June speculates that Gregory probably learnt that the cancer was too advanced for surgery and opted to stay in England to access necessary medical care.

Saddened by his loss and the uncertainty of how his last moments were spent, she is, however, buoyed by the many memories they shared. Among them, the time they were living in Washington, DC, USA, and "nothing was really happening" for Gregory.

One night while they were in bed, 'Super' as he was also known, turned to his wife who had recently shorn her shoulder-length locks and asked her to cut his.

Shocked, she refused, thinking he had to be joking.

"Yu mussi mad. When you get vex you go seh is me, Delilah, trim you when you a asleep," she replied. Undaunted, Gregory surprised her by taking a pair of scissors and cut his matted hair, going to a barber the next morning to have the job completed. He then opted for the Jheri Curl hairstyle and, upon their return to Jamaica, the 'Cool Ruler' put in a smashing performance at the Peppers Night Club in St Andrew, signalling the start of a new chapter for the Storybook Children.

Now, after 26 years of marriage, the dream has ended, but June will always cherish her memories of being the original Night Nurse for the inimitable Cool Ruler.