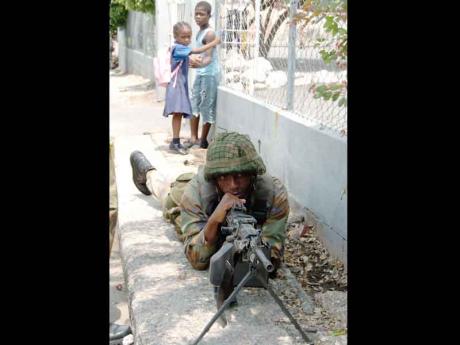 Two children seem to cower in fear as a Jamaica Defence Force soldier takes up a defensive position during a joint police-military operation at Matthews Lane, downtown Kingston. A study shows that children in inner-city communities were disproportionately exposed to crime and violence, many of them as young as three years old being taught to handle guns. 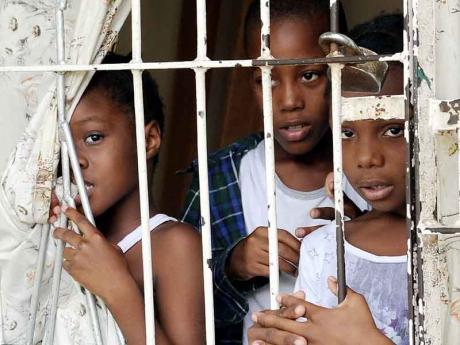 Children who have been hemmed in - first by gunmen loyal to Christopher Coke, and then by the security forces - look out from behind a grille to their home in Tivoli Gardens. - Rudolph Brown/Photographer
1
2

AS THE nation faces the daily reports of murderous acts by criminals, PhD graduate of the Northern Caribbean University and chief executive officer of Andrews Memorial Hospital, Dr Patric Rutherford, is urging the Government to push harder on crime-reduction strategies for the sake of our children.

The call is based on research done by Rutherford as part of his doctoral dissertation.

The research revealed that students who attend schools in the inner-city communities of Kingston suffer from post-traumatic stress disorder (PTSD) more than those in less-volatile communities.

The study also revealed that 15.5 per cent of the students who attend schools in the inner-city communities of Kingston suffer from PTSD. That is, in a class of 33 students, five suffer from PTSD.

The 15.5 per cent of students in the inner-city schools with PTSD is well above the three to six per cent in the general population of high schools in the United States.

PTSD is an emotional illness - a severe anxiety disorder - that develops as a result of a very frightening or life-threatening experiences.

Sufferers of PTSD keep re-experiencing the traumatic event or events in some way; tend to avoid places, people, or things that remind them of the event; and are overly sensitive to normal life experiences.

There is a preponderance of evidence from previous studies showing that PTSD has been linked with significantly lower academic achievement.

The emotional trauma that children in inner-city communities in Kingston experience has a serious negative effect on their ability to perform academically and socially, especially those children who do not have access to support systems that can help them to cope.

Rutherford argued: "If the young of our inner-city communities are to have a fighting chance to rise above the poverty and decay of their surroundings through education, they need the security and safety of growing up without the high levels of trauma they are now experiencing.

"Think of what it would be for you as a child to take cover under your bed for half the night while all around there are sounds of guns firing and bullets whizzing by.

"Or think of a child going home from school and witnessing someone being murdered, the body convulsing on the roadside until life ebbs away, and the fear that they, too, may be killed to be kept from providing evidence against the murderers. These are harsh realities that are faced by children living in inner-city communities," Rutherford added.

Of the 198 randomly selected students participating in the study, 170 had had traumatic experiences.

Of those who had experienced a traumatic event, there were 90 students (53 per cent) who indicated that the trauma was linked to violent incidents including stabbings, shootings, and rapes.

More students in the inner city had PTSD compared to those who resided elsewhere.

There were slightly more than twice as many females (21) with PTSD compared to males (10).

This finding was consistent with previous studies, which show that females are more prone to developing PTSD.

The study showed no statistically significant difference in the occurrence of PTSD between those students who attended church and those who did not.

Numerically, there were more students (19) with PTSD who attended church, compared to 12 who did not attend.

According to Rutherford, his was the first study conducted to establish the extent to which PTSD exists among children and youth living in the inner-city communities of Kingston.

He argued that without information on the prevalence of this condition, there would not be effective intervention planning and execution.

"The solution to the problem lies on two fronts: one is to diagnose and treat those with PTSD," Rutherford said.

He pointed out that PTSD was treatable, but treatment required the services of a psychiatrist or psychologist.

"The process will be greatly enhanced if teachers and guidance counsellors are trained to identify students with symptoms of PTSD and refer them to the appropriate professionals for treatment," argued Rutherford.

Treatment for children with PTSD is provided through the Child Guidance Clinic at The Bustamante Hospital for Children, however, Rutherford fears that there are not enough practitioners employed to that facility to handle the number of cases that exist in the population.

"Most of the students in the schools under study cannot afford to pay for therapy privately. So the Government needs to increase the number of practitioners that are so desperately needed for public education and treatment."

If PTSD goes untreated, its victims become prone to depression, drug abuse, and the inability to develop the skills necessary to build healthy relationships.

The person with PTSD is difficult to live with and could become a big source of stress to the families of which they are part.

"With higher levels of violence spreading into the parishes of St Catherine, Clarendon, and St James, it would also be helpful to know what the occurrence of PTSD is in those communities.

"There also needs to be research on the occurrence of PTSD among other age groups, especially younger children," argued Rutherford.