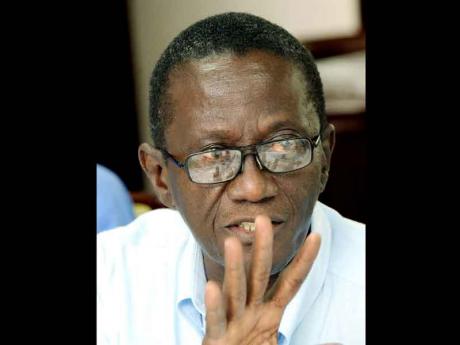 MINISTER OF National Security Senator Dwight Nelson has condemned the killing of Constable Dwayne Brown of the Protective Services Division.

Reports from the Constabulary Communication Network stated that the 33-year-old constable was shot dead by unknown assailants at Valentine Gardens in Kingston on Friday night.

According to reports, at about 9:20 p.m., Brown was standing beside his car - which was parked along the roadway - when two men, one armed with a gun, walked up to him and demanded money. Brown reportedly complied but the armed man opened fire, hitting him. The constable's service pistol was also taken.

Minister Nelson said the killing of Constable Brown brings to the fore the inherent danger that members of the Jamaica Constabulary Force faced in their public and private lives.

He added that the cowardly manner in which the act was perpetrated showed how depraved and dastardly these criminals were as they unleashed their tyranny on the society.

Minister Nelson noted that Constable Brown served as part of the security detail of one past and one present member of parliament, and had gained the respect and admiration of all.

"I would say Dwayne Brown was part of my security detail for a short period during that time, and I found him to be very professional. He was always punctual, neat, quiet and extremely courteous. I share the grief of his colleagues and friends at the time of his unfortunate departure," Smith told The Sunday Gleaner.

Brown's death brings to 14 the number of policemen killed since the start of the year.