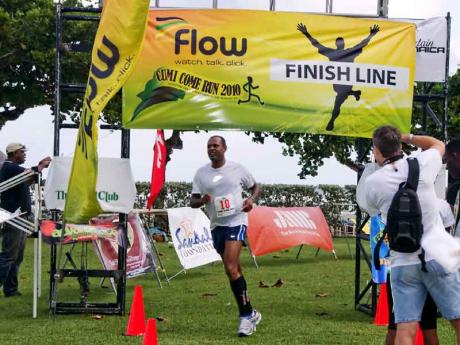 THE BIG WINNER: Leroy Daley crosses the finish line first in the Flow CUMI Come Run 2010 10K run at the Tryall Club, Hanover, yesterday. Last year, it was victory denied for Daley, who had to be rushed to the hospital because of dehydration, and he failed to finish the race. He, however, vowed to return and this year copped the big title. - Photo by Barrington Flemming

Leroy Daley and Stephanie Parey Smith took top honours in the Flow Committee for the Upliftment of the Mentally Ill, CUMI Come Run 2010, at the Tryall Club, Hanover, yesterday.

For Daley the win was special as he failed to finish the event last year.

"I entered the event last year but I passed out and had to go to the hospital because of dehydration. This year I decided to come back and finish it. The competitors helped to push me and conditions were better this year and it's only six miles so it was a good race," he said.

Anthony Mills and Jermaine Rerrie were second and third, respectively, in the 10K run (male), with Tiffany Hamilton second and Karel Mullings third in the female category.

In the presentation ceremony which followed, Daley and Smith each received the Elizabeth Hall Trophy and an Everex Desktop Computer, courtesy of Flow, along with other prizes.

Camoy Walcott took the first place in the female category of the 5K run with Brigette Young of Tryall placing second.

Ryan Byfield of Scotiabank took top honours in the male category, with Christian Sales and Barrington Groves settling for second and third.

A new award introduced this year, Best Corporate Team (team with the largest number of persons participating in each category), went to Pan Caribbean Merchant Bank.

The event lived up to top billing, attracting more than 200 participants and netting just over $3,000,000 of a targeted $4 million.

Title sponsor Flow made a $1 million dollar donation to CUMI with public relations manager, Denise Williams, indicating that the company would be granting further assistance to the non-profit organisation.

Encouraged to get involved

"One of the pledges we made when we launched our services into Montego Bay was that we were going to invest in the community, and this particular cause came up as one of the best one to support. When we hear about the work that they do it really encouraged all of us, including my entire team, which came all the way from Kingston to participate in this event. This is indeed a great brand for Flow to be aligned with," she asserted.

Nurse administrator of CUMI, Joy Crooks, said she was heartened by the support from Flow and other sponsors, as well as the overwhelming support from the participants, which made the run a success.

"We are so happy for the support we have received here today. This will go a long way in helping us to build our trust fund from which we use the interest to run our programme. The services we offer at CUMI are free of cost to our clients, who we help to get back to their normal lives, manage their mental illness, get employed and live a normal life like anyone else."