Feanny's 'Don' too good for Turbine 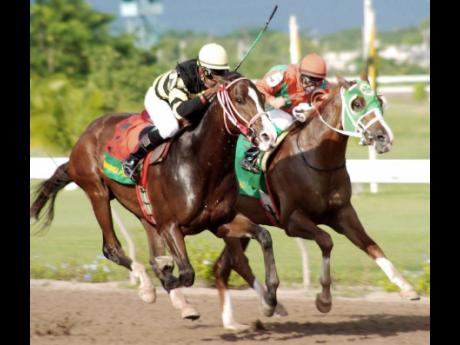 Ridden by five-time champion jockey Trevor Simpson in the black and yellow silks of the Oakridge Farms, DON GEORGE swooped down on long-time leader TURBINE approaching the home turn and under a strong ride from Simpson, gained the ascendancy in the last 100 metres to win by three-quarter length.

The race was contested by six maiden and untried two-year-old colts and geldings.

TURBINE, who went down fighting under Panamanian jockey Dick Cardenas, finished 4 3/4 lengths clear of the 9-5 second favourite BEARS AND BULLS, who was ridden by Shane Ellis for trainer Percy Hussey whose mom, Ruth, was the owner of the outstanding two-year-old colt Royal Lancaster (1985) in whose honour the race is run annually.

Bred by HAM Stables Limited, DON GEORGE is a bay colt by Royal Minister out of Lunar Explosion which makes him a half brother to the useful open allowance horse VONAL-MIGHTY.

Feanny is the season's top two-year-old trainer with seven wins from 23 starts.

The annual thoroughbred yearling sale will be held on Sunday, November 14 in the official car park at Caymanas Park.

Walker won aboard the season's top two-year-old, Tony Kirlew's American-bred colt MISMYRTLE-BOYRICHIE (3-4), who captured the opening race in a driving finish from 1-2 favourite DANCE SO SWEET, then followed up with evens favourite BURNING CIELO in the overnight race at 1500 metres, pushing his season's tally to 94.

Nelson booted home 8-5 chance DIAMOND VALLEY in the second race for maiden three-year-olds and followed up in the next race aboard 3-1 chance KING'S LAW, who ran on strongly a furlong out for an easy victory.

Tadious, who had been riding successfully at Laurel Park prior to coming here, failed to impress aboard his two rides - SEEK GOLD and ERGASIA in the third and eighth races, respectively. But the former Hillel student disclosed that he would be riding here for an extended period and was hoping to do very well.