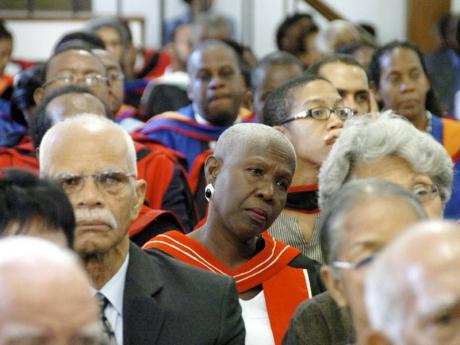 Professor Carolyn Cooper (centre) is a portrait of sorrow and reflection as she sits among a sea of academics at the University Chapel Monday. 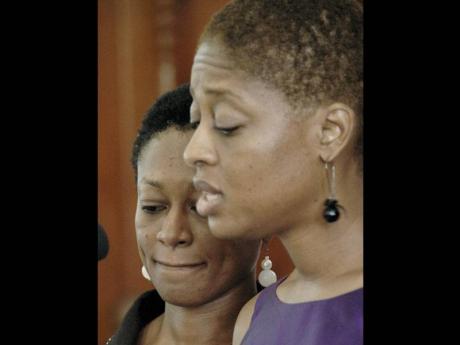 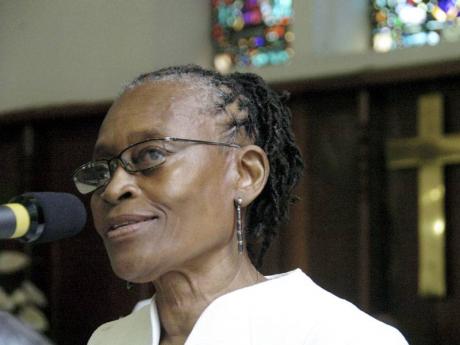 Pauletta Chevannes, widow of Barry Chevannes, delivers a tribute at the funeral on Monday.
1
2
3

Pauletta Chevannes, wife of the late Professor Alston Chevannes, better known as Barry, opened the doors and let hundreds of mourners into the private and romantic life she shared with her husband.

She described a partner with whom she wrote, cried, composed, danced, shared stories, "explored beautiful Jamaica" and loved.

Despite missing him, Pauletta's clear and strong voice rang out in the University Chapel on Monday.

"I give thanks for having the good fortune of sharing 42 years of shared happiness," she said in her tribute.

Chevannes, a sociologist and activist for peace, passed away on November 5 at the University Hospital of the West Indies after being admitted in September.

Pauletta spoke of a man she knew well, who was not pretentious and was not ashamed to express his love, whether publicly or privately.

She recalled enjoying her early-morning cup of tea and appreciating a rose picked from her garden.

Pauletta recalled one intimate moment in which her husband lovingly cleaned dirt that "often lodged in (her) fingers from (her) carelessness in the garden ... at the same time, tenderly, but sternly rebuking me for not wearing the gloves he bought for me".

Silence settled on the chapel as Pauletta told stories of the romantic who would surprise her with jewellery, a new pair of shoes and the happiness the professor expressed at her approval.

They also shared their afternoon meal "every day, at which time we would discuss our daily experiences and the various encounters.

"Yes, my colleagues in the Department of Education now understand why I refused to have lunch at the regular staff meetings," she said.

The professor's daughter, Abena, her voice rich with love, said her father, over the years, had become her friend.

"He'll move through the darkness bringing his love, his light to it," she said.

Kinshasa Kirkwood Minott fondly said that despite having her own parents who were loving, she was 'adopted' by 'Uncle Barry' and 'Auntie Paulette'.

"Today I must tell you about the greatest gift I received from this father, that of unconditional love. With Uncle Barry, there was never judgement. For all my failings, I was never chastised or criticised."

Standing outside the chapel were Bongo Joe and Bongo 'Ras Inie' Mannie, who were there to pay their respects to the man they fondly referred to as Nyabinghi Bredren.

Bongo Mannie said Chevannes was a good friend and very supportive of the Rastafari movement.

"He was a man that established the faith of Nyabinghi to the highest levels.

"Here is the man who made Rastafari a part of the curriculum. I and I love him from the heart and miss him. I hope his soul will rest in peace. Selah," Bongo Mannie said.