Chevannes' drums will not go quiet 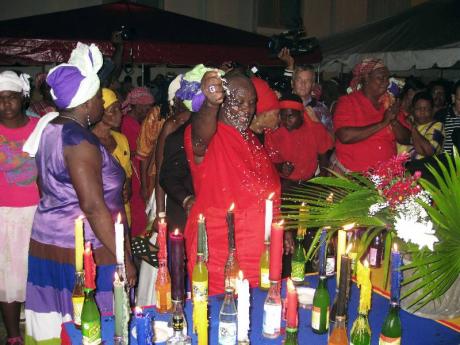 There was a large picture of a smiling Barry Chevannes and an open condolence book, in which many persons inscribed their emotions. Close by, in display cases, were some of the books in which Chevannes recorded his research findings - Rastafari Roots and Ideology, Betwixt and Between and Learning to be a Man, as well as the CD Black Op.

Along with these at the Undercroft of the University of the West Indies, Mona, last Saturday was a table set with sugar, salt, bread and Redemption Songs.

There were those who made the short circuit of the items. However, as the wake for the professor emeritus worked its way to a climactic closure, it was not the items under the covered part of the Undercroft that were the focus of the circuit of those paying homage to Chevannes, but the related yet varied music and affiliated religious forms on the grass.

The celebrants for Chevannes' life moved from Revival to Kumina to the closing Nyahbinghi, some making a rhythmically dancing circuit around the Kumina drummers and dancing behind the slower-paced Binghi players.

The songs and chants were picked up in call and response fashion, some naturally more well known - and hence given stronger voice - than others.

The Revival featured electronically amplified instruments, the worshippers circling the candlelit table close to the end. Daddy Rudd said "Professor Barry Chevannes is a very powerful man. We lose a powerful person. I am rejoicing in a full and true salvation.

He also spoke to his memories of someone who was there, former Prime Minister Edward Seaga. "I remember time gone by him a spin in him gown. Dat time me a little boy," Daddy Rudd said.