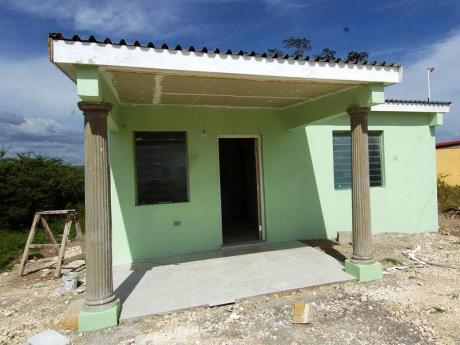 The house that was built for the late Karen Elliott and her four children in Old Harbour Bay, St Catherine. The handover ceremony was held in 2009. - File

THREE YEARS after the Child Development Agency (CDA) took away four children from their now-deceased mother, Karen Elliot, they remain in the custody of the agency because a suitable caregiver cannot be identified.

Elliot had been forced to live with her children in the dilapidated Old Harbour Bay Community Centre after Hurricane Dean hit the island in 2007.

After The Gleaner highlighted her story, officials from the CDA took her children to a safer location. The separation from her family plunged the mother into a state of sadness. She subsequently died before she could move into a house that was erected on the plot of land she received from the Ministry of Water and Housing.

"The children are with us because no suitable adult has come forward to take them and treat them to the expected standard. As such, we cannot release them, even though we would have loved to,'' Glen Campbell of the CDA said.

Campbell told The Gleaner that while relatives were interested, they did not meet the criteria of the CDA.

Meanwhile, Campbell said the CDA is attempting to get other agencies on board, with the intention of placing the children in the care of other competent caregivers.

"We have to make sure they get a suitable environment that befits a home, so it makes sense for us to do what's best for the children,'' Campbell concluded.

He said the house is still the property of the children, and would be turned over to them as soon as they attained the required age.

Campbell said the children are now between the ages of four and 16.