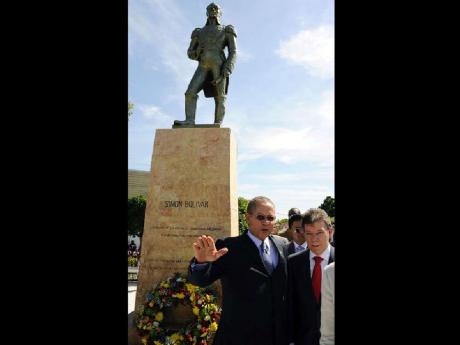 President of the Republic of Colombia, Juan Manuel Santos Calderón, hopes the strategies his country used to fight the drug cartel in his country will be of benefit to Jamaica's crime problem.

The president, who arrived yesterday here for a one-day state visit, acknowledged that his country was plagued by the problem of violence stemming from guerrilla warfare and the drug cartel for years. However, yesterday he said Colombia had effectively waged a successful war against the drug cartel.

"Ten years ago, we were fighting for survival; it was the only thing we could deal with," said Santos at the University of West Indies, Mona, yesterday.

"Today, Colombia is a different country, and a lot of sacrifices were made to achieve that," he added.

Santos said the fight against organised crime in his country saw a great number of people, including government officials, judges, and police officers lose their lives.

Prime Minister Bruce Golding, who received Santos, discussed with the Colombian president ways to strengthen Jamaica and Colombia's connection in areas of oil and gas exploration, tourism, and the fight against narco trafficking.

Jamaica has been attempting to battle the problem of organised crime. Like Colombia, the country is listed among the major illicit drug-producing and/or drug-transit countries by the 2009 International Narcotics Control Strategy Report, published by the United States Department of State.

Meanwhile, Santos' one-day visit had a full itinerary, which included a wreath-laying ceremony at National Heroes Circle at the statue of South American liberator, Simón Bolívar.

Bolívar, a Venezuelan military and political leader, played a key role in Hispanic America's successful struggle for independence from Spain.