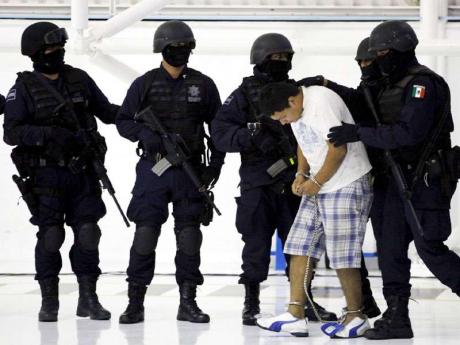 Federal police present an alleged drug-cartel member to the press in Mexico City, Friday, August 13. Five alleged members of La Linea drug cartel, accused of participating in the killings of two federal police officers, were arrested Thursday in the border town of Ciudad Juarez, according to the police. - AP

A 21-year-old university student lies dead from a gunshot to the head. Nearby, paramedics wrap the head of another woman in a blood-soaked shirt while her husband holds their cowering children.

They were shopping in a popular downtown promenade when gunmen chasing a security guard opened fire into the crowd. This wasn't supposed to happen in Monterrey, Mexico's modern northern city with gleaming glass towers that rise against the Sierra Madre, where students flock to world-class universities, including the country's equivalent of MIT.

But drug violence has painted Monterrey with the look and feel of the gritty border 100 miles (160 kilometers) to the north as two former allies, the Gulf and Zetas gangs, fight for control of Mexico's third-largest - and wealthiest - city.

The deterioration happened nearly overnight, laying bare issues that plague the entire country - a lack of credible policing and the Mexican habit of looking the other way at the drug trade as long as it was orderly and peaceful.

"To a certain extent, we saw ourselves as a privileged city and very isolated from Mexico's problems," said Blanca Trevino, Monterrey-based president and CEO of Softtek, the largest information-technology consulting firm in Latin America. "The violence hit us because we were not accustomed to having it and, therefore, to handling it. Now we live in a sort of psychosis."

The Mexican government announced on Wednesday it was ordering a significant boost in military troops and federal police in the northeastern border state of Tamaulipas and neighbouring Nuevo Leon, home to Monterrey.

The two states are under the heaviest attack since the cartel split earlier this year. Both have witnessed increasingly horrific violence spilling into daily life and claiming civilians, while politicians and journalists are either silenced or killed.

Earlier this month, residents fleeing gunbattles in Tamaulipas' once-picturesque town of Ciudad Mier ended up in Mexico's first drug-war refugee shelter in a nearby town, only to duck bullets from a gunbattle there.

Monterrey was used to being Mexico's definition of opportunity. The city of 4 million "regios" - a nickname for Monterrey residents that means "people of the regal mountains" - represented the future as money poured into northern Mexico from free trade and the opening of scores of assembly plants.

The city's many CEOs drove their own luxury cars unaccompanied to the trendiest Japanese restaurant or the top spot for roasted goat, the state's specialty, in the wealthy enclave of San Pedro Garza Garcia.

Some drug lords and their families retreated to the safety of Monterrey as well. In the home of the country's industrial heavyweights, including the world's third-largest cement maker, Cemex, and bottling giant Femsa, they could easily blend in with executives showing off their wealth.

Then-leader of the Gulf cartel, Juan Garcia Abrego, was arrested in the nearby town of Juarez in 1996. Two years later, a US sting led to criminal charges of money laundering against employees at three Monterrey-based Mexican banks.

Despite sporadic violence and the known presence of drug traffickers, the city enjoyed a tranquility that gave it a provincial feel.

That started to change four years ago, when the Sinaloa cartel began battling the Gulf cartel for a piece of Monterrey's lucrative domestic drug market. The violence subsided after the cartels reportedly agreed to share the turf.

With the Gulf-Zeta split, the downfall was swift - "extremely so," in the words of US Ambassador to Mexico Carlos Pascual - for a city with huge American interests that in some ways identifies more closely with the US than Mexico.

"It's part of the risk of accommodating or allowing criminal groups to be able to live and operate quote 'safely' in an area for the sake of peace," Pascual told The Associated Press. "But then this rupture occurs and turns into a massive battle."

As in much of Mexico, there was no viable law enforcement to counter the onslaught. The Zetas control the local police, Pascual said. Other police forces aligned with the Gulf cartel in the fight against them.

About half of the 750 police officers in Monterrey have been fired on suspicion of links to organised crime.

"Rather than becoming part of the solution, they become part of the problem," Pascual said. "When criminal groups want to contest one another for territory, if you don't have strong local law enforcement capable of immediately reacting and putting that down, then the violence has the capacity to continue."

More than 500 people have died in drug violence in the first 10 months of the year, compared to 56 slayings for all of 2009, according to tallies kept by the city's El Norte newspaper.

Residents are used to having their daily routines interrupted by carjackings and "narcobloqueos" - roadblocks with stolen vehicles designed to keep police and soldiers at bay as the cartels do their business.

They drive simple cars and avoid nightclubs and bars and go to parties with their pajamas, ready to spend the night in case it's too dangerous to venture home.

In March, two students at the prestigious Monterrey Tech University, Mexico's equivalent of the Massachusetts Institute of Technology, died when they were caught in a gunfight between soldiers and gunmen outside the campus.

Five months later, the US State Department ordered diplomats to remove their children from the area after a shooting outside the American Foundation School, a private school attended by many Americans and the children of some of Monterrey's wealthiest families. Two security guards working for the Femsa bottling company died in the gunbattle.

The city's businesspeople are now becoming the targets of extortion and kidnappings as drug traffickers look for other ways to make money. Common criminals also take advantage of the chaos. Now almost everyone knows someone who has been a victim of a crime.

The traditional weekend shopping trips to McAllen or Laredo, Texas, have stopped - it's too risky to drive along highways patrolled by gunmen. Those who still travel to South Padre Island, where the rich own weekend condos, do it by airplane.

The business community published a letter in national newspapers, as far back as August, demanding President Felipe Calderon and Nuevo Leon governor, Rodrigo Medina, send more troops. Now it will get its wish, though the government didn't detail how many would be sent, citing security.

But Aldo Fasci Zuazua thinks regios can make the difference. The former state public safety secretary and assistant attorney general is helping to lead a peace movement to galvanise people to stand up to the cartels.

"In Italy, in Colombia, things calmed down among the cartels, among the mafia, when people took to the streets and said, 'Enough!'" he said.