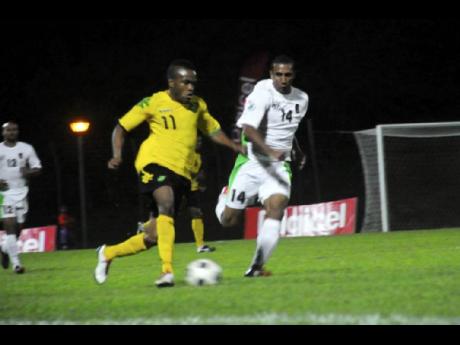 Jamaica will be going for the maximum to maintain their momentum, when they tackle Guyana in their third and final Group I Digicel Caribbean Cup match, at the Riviere Pilote Stadium, scheduled to kick off tonight at 8:30 (7:30 Jamaica time).

The match will be preceded by a 6 p.m. (5 p.m. Jamaica time) clash involving Guadeloupe and Antigua and Barbuda, with the latter needing only a draw to advance with Jamaica to the semi-finals against the top two teams from Group H.

Having knocked off Antigua and Barbuda 3-1 and Guadeloupe 2-0 in their two previous matches, the Reggae Boyz are now on six points and will be sure to finish top of the group with nine, well ahead of any of the other competitors.

The top two teams from the group will progress to the semi-finals and the other three teams are all in with a chance.

Guadeloupe have looked the best of the lot and would be in with a great chance of advancing should they win, but their finishing has not been good, while Guyana's only hope rests in an unlikely victory over Jamaica.

This task will be made even more difficult because the Reggae Boyz have no intention of letting up. They want to maintain their winning trend, though they will be forced to make changes.

"We have the final game come Wednesday night and again we have to look at a number of changes," said Theodore Whitmore, the team's head coach, following their victory over Guadeloupe on Monday night. "We have the skipper Shavar Thomas out and Rodolph Austin out (on yellow cards) and we will give the younger players, or other players a chance to show what they have, so they have a decent opportunity and we don't want to go into the last game and take anything for granted, we want to go out there and give a good performance and win the last game as well."

Whitmore also pointed out that he wants to give Ryan Johnson, who joined the squad late and scored on Monday, a full 90 minutes and it is anticipated that he will do the same with Omar Cummings. Cummings is recovering from an injury. They will add to a high-powered offence, which has been making a huge difference for the Jamaica team.

Numbered among them are Dane Richards, who has been wreaking havoc and becoming a fan favourite largely because of his deceptive and effective plays; Luton Shelton, whose pace makes him hard to contain and Keammar Daley, who has been creating clear scoring chances though not on top of his game.

The team got several on Monday, with Shelton and Richards going close to scoring on several occasions throughout, as the team continues to make clear openings on a consistent basis.

"I think it was a decent performance from the team," commented Whitmore of that performance. "(In) the first half of the game I think the final pass at times, we over hit the ball, we tried to overpass in the final third. I don't think we were creative, we just left everything up to Dane Richards and Luton Shelton, we weren't playing as a team in the final third and I think in the second half we could see a big difference, we were more organised and the guys played to instructions in the second half."

Jamaica have easily controlled and dominated their opponents when they put the ball on the floor and co-ordinate their build-ups in a patient and organised way. They did this against Guadeloupe and were able to dominate for long periods.

For this contest, Richard Edwards is expected to filter into the central midfield role, while Keneil Moodie could take the sweeper's spot behind the competent pair of Jermaine Taylor, who has been outstanding, and Adrian Reid.

A nice trend is that the defensive unit has not allowed many clear openings since the start of this tournament, but for a period close to and just after the interval against Guadeloupe, they were not as tight when Guadeloupe's captain, Stephane Auvray, got three of four decent looks on goal.

"I think at times the team lacks concentration in certain periods of the game as you could see early in the second half, but it is going to take some time to work on. But the greatest thing is we are getting the results and today we kept a clean sheet," Whitmore observed.

With regards to the Guyana team, the Reggae Boyz coach expects them to lift themselves for the contest.

"If you looked at the Guyana versus Antigua game today, (Monday) you could have actually fallen asleep," he noted. "But once they are up against a Jamaica team it is going to be a totally different ball game."