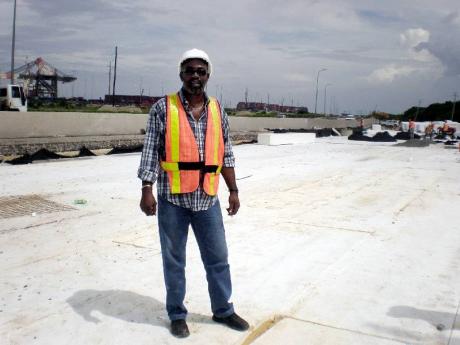 Keith Edwards, owner and CEO of Free Form Factory, stands on expanded polystyrene before it is covered with asphalt during the repair of the Portmore leg of Highway 2000.

Earlier this year, when Bouygues - the French company that ultimately owns the concession for the existing segments of Highway 2000 - needed to repair a leg of the highway between Kingston and the causeway that connects the capital with Portmore, it turned to what, for Jamaica, was an unusual fix.

The problem was that a portion of the highway is, in part, built on reclaimed land, near mangroves.

The subsurface is soft and allowances were made for this, but during the design stages, the road settled much faster than the engineers and geologists expected. This caused potentially hazardous undulations in the roadway.

Bouygues, therefore, wanted a fill that was not only significantly lighter than the compacted marl that was part of the previous substructure, but one with the compressive strength to take the pressure of traffic without sinking the road.

Bouygues' engineers settled on geofoam, or expanded polystyrene (EPS), a lightweight but strong foam plastic invented in the late 1950s, which is being used increasingly in buildings and road construction. Geofoam is up to 100 times lighter than most soils and, the experts say, up to 30 times lighter than most lightweight alternatives, which makes it particularly suitable for road builders as an overlay on soft and loose soil.

Significantly, for its use in Jamaica, Bouygues didn't have to import the stuff.

All 10,000 cubic metres of the product used for the project were manufactured at a factory at Nanse Pen, off Spanish Town Road in Kingston.

"Bouygues used EPS in various applications, such as insulating their (site) buildings during the construction period, and we supplied them," explained Keith Edwards, the principal and CEO of Free Form Factory Ltd, the Nanse Pen facility.

In fact, Edwards was even asked to quote on EPS during the highway design, but it was not used in the construction.

Now, though, Edwards faced greater demands than when he previously sold polystyrene to Bouygues.

"We had to work to European standards," he said.

For instance, measurements were converted to satisfy Bouygues' needs and there was frequent testing of the "compressive strength of the foam to ensure that it met their requirements," Edwards said.

Edwards, whose factory employs 25 people, hopes the example from Bouygues' fix will lead to the increasing use of this product in road and related construction.

"We can use it here as a filler, for retaining walls and culverts," he suggested - a growing trend in the United States, that the US Federal Highway Administration says, in an assessment posted on its website, is leading to cost and time reduction in road construction.

But Edwards is hedging his bets on the future of his factory solely on whether polystyrene catches on in Jamaica in road construction. He is seeking to exploit its growing use in building construction, where soaring costs give EPS an advantage.

Indeed, after a decade of operating Free Form Factory, Edwards says that it has been only recently that its products have caught on.

"A lot of people have now realised that polystyrene foam is cost-cutting and enhances their home," Edwards told the Financial Gleaner during a tour of his Spanish Town Road facility. "Just like anything, when it's new, it takes some time to catch on, but slowly we are getting there."

Apart from the Highway 2000 repair, Edwards' company has worked on other big projects such as the Palmyra resort in Montego Bay and a National Housing Trust scheme in Spanish Town.

For each, workmen applied fibre mesh to the foam before completing the insulation process with cement, which not only gives it a rock-solid feel but ensures resistance to the elements.

Edwards said the biggest endorsements of his projects have come from unlikely quarters.

"We have passed through a couple of hurricanes without a hitch. I can safely say my customers are happy."

Architects and construction companies around the world have utilised polystyrene foam products for more than 50 years on houses, shopping malls and highways.

Movie producers, always eager to lighten their budgets, have foregone traditional building methods and built elaborate sets out of foam.

Stage managers for major music acts like Michael Jackson and the Rolling Stones followed suit. Extravagant foam sets are easier to set up and dismantle.

Edwards has tapped into this type of creativity to show foam's versatility. Among his 25 employees, he has persons who design everything from fireplaces to palatial steps and columns.

While business has picked up considerably, Edwards admits it may be some time before the polystyrene foam concept replaces conventional building techniques.

"We don't want to get rid of block and steel, we just want to offer an alternative to desirous homeowners. We need to find alternative material that enables them to own a home," he said.

Edwards said his first experience of polystyrene foam came during the 1970s while he was living in Toronto, Canada.

He saw construction companies use the material to build cheaper homes that were as durable as concrete ones, but it was not his choice of business when he returned to Jamaica.

He opened a furniture company in 1992 but struggled to maintain it against the influx of imported products. After 11 years, he gave that up and invested in machines that produced polystyrene foam.

Currently, workers at the Free Form Factory Limited are capable of producing 300 cubic metres of foam during an eight-hour shift. Edwards says local and overseas developers who work on north-coast hotel projects are among his biggest clients.

Edwards' company is, at present, the only one of its kind in Jamaica. He is confident it is only a matter of time before demand for polystyrene foam transforms the construction sector.

"This material can solve a lot of our problems: embankments, retaining walls, etc. There are no limits," he said.