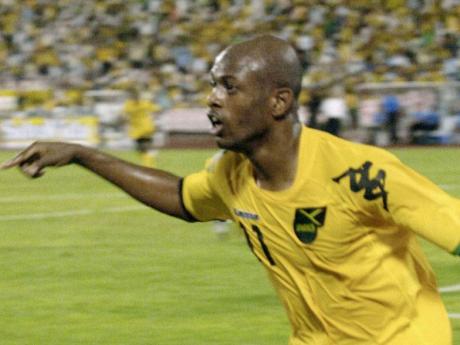 Ace forward Luton Shelton will be a key man for the Reggae Boyz today. - File

HAVING earned the luxury of early semi-final qualification, Theodore Whitmore decided to test the full range of his armoury.

Guyana felt the full effects of the Jamaican coach's weaponry and were demolished 4-0 in their last Digicel Caribbean Cup Group I encounter, at the Riviere Pilote Stadium on Wednesday night.

St George's College schoolboy Marvin Morgan (53rd, 75th) and Eric Vernan (90th), two of eight non-starters to finish the match, accounted for three of Jamaica's goals, while Dane Richards (43rd) scored the other for a team that is even more desperate to succeed and give credence to their worth, after a stand-off with its federation here for additional money.

Victory over Guyana ensured Jamaica a comprehensive sweep of their preliminary matches, as they ended with maximum nine points while warming up for their semi-final encounter against Grenada, which will take place tonight at the Pierre Aliker, Dillon Stadium. Match time is 8:30 (7:30 Jamaica time).

For that clash, Whitmore is reloading his charges as the Reggae Boyz get set for another explosion. But while their efficiency before goal has been a welcome signal, it has brought along some selection concerns for the coach.

"I think the players we brought in were a bit hungry tonight and it is a positive sign going into the semi-final, and it gives the coaching staff a lot to think about," admitted Whitmore, who actually made six changes to his starting team on Wednesday.

Offensively, the Jamaicans have been head and shoulders above their semi-final counterparts in this tournament, scoring nine goals and conceding one in three matches. So, too, has been their play when they put the ball on the turf and move it around with patient and precise passing.

Despite his high-powered contribution in Wednesday's match, Morgan will watch action from the sidelines at kick-off tonight, as the Boyz roll out big guns Luton Shelton, Richards, Johnson and Omar Cummings, who was rested, for this giant showdown against the team they beat 2-1 to claim the championship title in Kingston in December 2008.

Shelton, Richards and Johnson have all scored during this campaign.

While all the strikers but Cummings got some action on Wednesday, key players Shavar Thomas, the captain and sweeper, along with central midfielder Rodolph Austin, will return after missing the last match because of an accumulation of yellow cards.

They figure prominently in a defensive unit that gets solid backing from Adrian Reid and the very solid Jermaine Taylor, as well as Dwayne Miller, who will retake his regular position in goal.

Despite the strength and experience of the defending champions, for whom the majority of its starters play professionally in Europe and the United States' Major League Soccer, the Grenadians are fancying their chances of an upset.

They beat Trinidad and Tobago 1-0 and drew 0-0 with Cuba and 2-2 with Martinique for a three-for, two-against goal record.

Interestingly, Jamaica have been their bugbear at the crucial stage in the past three championships, and Anthony Modeste, their captain and centre half, says they are determined to win this time.

For the other semi-final, with hosts Martinique out, fellow French department Guadeloupe are certain to draw the lion's share of support for their contest, that is set to kick off at 5:30 p.m. (4:30 p.m.) Jamaica time.

Cuba beat Trinidad and Tobago 2-0, Martinique 1-0 and drew goalless with Grenada and a three-for, none-against record that gave Group H honours with seven points, two ahead of Guadeloupe who drew 1-1 with Guyana, lost 2-0 to Jamaica then rebounded for a 1-0 victory over Antigua and Barbuda.