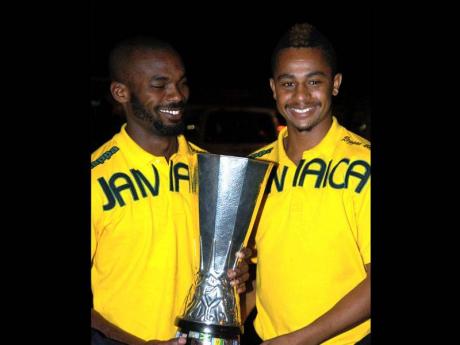 Forward Omar Cummings and assistant coach Bradley Stewart said the pay dispute which erupted during the just-concluded Digicel Caribbean Cup in Martinique, served as added motivation for the players as they went in search of the title.

The Boyz, led by senior players Shavar Thomas, Luton Shelton, Rudolph Austin and Jermaine Taylor, staged a brief protest during the championship over per diem for the squad and sharing of the prize money, should the team be successful.

This led to the players at one stage threatening to "not lace up their boots", and it was only after the intervention of Jamaica Football Federation (JFF) president, Captain Horace Burrell, who decided to pay the players from his personal account that the issue was settled.

"If it affected us, it was on a positive note, as everyone came together even more and played as a team. It made us even stronger than (we were) when we left Jamaica," said Cummings, shortly after the team's arrival home on Monday night.

"My own view is that it served as an extra motivation, as now that they got what they demanded they had no choice but to produce, and if they did not produce I am not so sure that they would be welcomed home," said Stewart.

"We have come home with the trophy and this is a testament to the focus, which they players demonstrated throughout the tournament, especially after the internal problems," he added.

The Boyz, who will now turn their attention to the CONCACAF Gold Cup which will be staged next year, lifted the cup after defeating Guadeloupe 5-4 on penalties after both teams had played to a 1-1 scoreline at the end of regulation and extra-time.

The team had earlier defeated Antigua and Barbuda 3-1, Guadeloupe 2-0 and Guyana 4-0 in the preliminary round, before getting the better of Grenada 2-1 in the semi-finals.

This was the team's fifth lien on the coveted regional crown and only Trinidad and Tobago with eight titles can claim more success at this level.