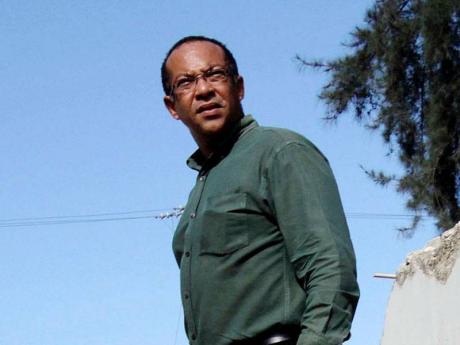 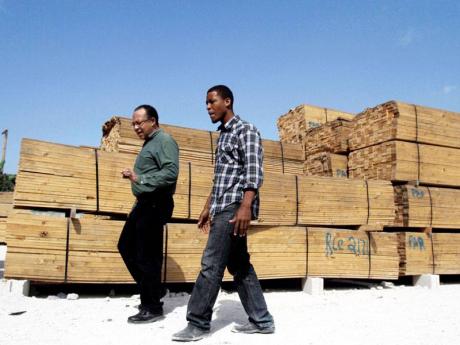 Haitian Patrick Brun (left), owner of a company that distributes construction supplies, walks with an employee at his facilities in Port-au-Prince, Haiti, last Saturday. Out of every US$100 of US contracts now paid out to rebuild Haiti, Haitian firms have successfully won US$1.60. - ap
1
2

In a Port-au-Prince warehouse loaded with tarps, plywood, corrugated roofing, nails and other building supplies, company owner Patrick Brun says he had hoped to get contracts from the billions of dollars in international aid promised to Haiti.

His 40-year-old company, Chabuma SA, sells cement, blocks, doors, sand bags and other materials for international companies. But what he wants is a more significant role in his country's recovery, which is why he says he keeps bidding - without success - for United States government contracts.

"You can imagine that if we can't win the contracts ourselves, we become totally dependent on foreign companies and non-profits, and there is not much hope in that," he said. "We may not have the extended capacity of a US company, but we are respectable. We keep good books and records, we have foreign suppliers, we have good credit, we pay our taxes and our customs dues."

Out of every US$100 of US contracts now paid out to rebuild Haiti, Haitian firms have successfully won US$1.60, The Associated Press (AP) has found in a review of contracts since the earthquake on January 12. And the largest initial US contractors hired fewer Haitians than planned.

There are many reasons for the disparity. USAID is more familiar with some US contractors and gave out some no-bid contracts awarded out of urgency. There are fears also of the corruption that is rife in Haiti. On the Haitian side, there is a limited understanding of US government practices.

But using foreign aid to give local companies contracts is one of the most important aspects of reconstruction, says Clare Lockhart, chief executive officer of the Institute for State Effectiveness.

Of the 1,583 US contracts given so far in Haiti totalling US$267 million, only 20 - worth US$4.3 million - have gone to Haitian-owned companies. And an audit this fall by USAID's Inspector General found that more than 70 per cent of the funds given to the two largest US contractors for a cash-for-work project in Haiti was spent on equipment and materials. As a result, just 8,000 Haitians a day were being hired by June, instead of the planned 25,000 a day, according to the IG.

The contractors, Development Alternatives Inc of Bethesda (DAI), Maryland, and Chemonics International of Washington D.C., which received more than US$31 million each in no-bid contracts, responded to AP in an email saying that together with several other contractors, they had employed 25,000 Haitians a day. Now, they said, 10 months after the earthquake, "priorities have evolved beyond a focus on temporary employment," a program that has paid Haitian workers US$18 million in wages.

US AID says it is committed to increasing the amount of contracts going to Haitians.

"We already are engaging with Haitian communities to make them aware of how they can partner with us," said Janice Laurente, a spokeperson for USAID.

"Some are obvious, like salaries and profits that stay in the local economy, but there are also ways to increase capacity of local firms by giving them progressively larger contracts," says Werker.

But there are many hurdles to signing a contract with Haitians.

The first is a no-bid process: 25 per cent of the contracts went directly to US contractors without even giving Haitians a chance to bid on them, sometimes because the needs were so urgent there wasn't time to go through a formal bidding process. In addition, some government requests for local Haitian subcontractors and expertise are published only in English, limiting access for many Haitians who speak Creole.

Also, at times of catastrophe, it can be easier to use an established contractor with a strong record than a previously unknown local one. The Haitian economy was so decimated by the earthquake that it was hard at first even to get wood or tarps for shelters without importing them. Now, although there are Haitian companies providing many products and services, the pattern of using foreign ones continues.

And finally, it's more complicated to contract directly in countries like Haiti, where corruption is rife. There has been price-gouging among some would-be Haitian contractors.

The unprecedented promise of US$9 billion in aid, with the US as a top giver, at first, raised hope of rebuilding and even of a new and brighter future for the tragedy-prone island. But fewer than 10 per cent of those funds have made it past the "promise" stage.

While Chemonics and DAI are the largest single recipients, the bulk of the funds have gone to beltway contractors as well: firms in Virginia received the most funds of any state, US$45.3 million, followed closely by Maryland, US$44.6 million. Another US$31.7 million went to companies based in the District of Columbia.

The US foreign-aid contracts to Haiti since the earthquake have gone to an array of almost entirely US-based goods-and-services providers, from bullet-proof vehicles ordered November 18 by the Centers for Disease Control from a Miami-based firm to US$24,000 in dental supplies for US Navy medical providers in June from a Chesapeake, Virginia, firm. Yet, bullet-proof vehicles and dental supplies are available from Haitian companies, according to the non-profit Peace Dividend Trust.

"Frankly, it's a shame and a serious opportunity lost," says Edward Rees of the Peace Dividend Trust. His organisation put together a business portal, offering everything from security services to catering, and is training Haitians on how to bid for contracts and grants. "No one is systematically tracking how many contracts have gone to Haitian companies."

Low end of the spectrum

The lack of local spending in Haiti is similar to that in most other countries receiving US aid, although economist Werker said Haiti is likely at the low end of the spectrum. But Rees contrasts Haiti with Afghanistan, where - backed by Peace Dividend Trust - US Army General David H. Petraeus ordered his commanders to "Hire Afghans first, buy Afghan products, and build Afghan capacity."

The results in Afghanistan are encouraging: A recent study found that 37 per cent of US$2 billion in annual international aid is now being used to buy locally-produced Afghan goods and services, up from 31 per cent a few years ago.

The AP review focused on contracts from the US government, which spent an immediate US$1.1 billion in US humanitarian assistance after the earthquake, and promised another US$1.15 billion for reconstruction.

In November, the first US$120 million of the pledged reconstruction funds were transferred to the World Bank-run Haiti Reconstruction Fund, according to the State Department.

In addition to government aid, more than US$1 billion has come from non-profit charities, most of which try to buy local, said Samuel A. Worthington, president of InterAction, the largest alliance of US-based international non-governmental organisations.

He represents non-profits, managing about 90 per cent of the US donations that were directed to Haiti after the quake.

Worthington says there is no system to count how much has gone to Haitian-owned companies.

"There is a very strong bias to ensure as much local procurement as possible, and as much spending in the local economy," says Worthington. "Our bottom line is to serve as many people as possible and get the best price, to spread those dollars."