Another don killed - Residents claim he was unarmed and innocent 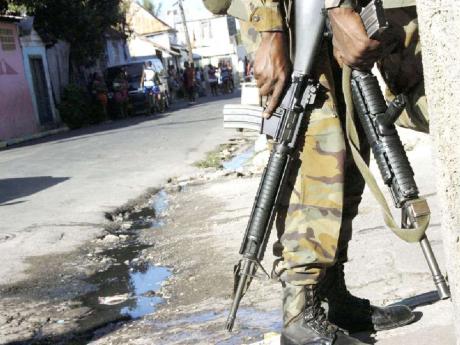 A MAN who reportedly heads the New World Order gang, which operates out of Southside and Rae Town in the Corporate Area, was killed yesterday in an alleged shoot-out with members of the security forces.

His death triggered anger and grief among residents who disputed the official reports.

The victim was 31-year-old Horace Ramsay, better known as 'Pugu' or 'Brown Man'.

The police, who were concise in their report of the fatal shooting, said a .380 pistol and two rounds of ammunition were seized by a joint security forces team, along with a quantity of marijuana and a motorcycle during the early morning operation.

But angry residents, who took to the streets and blocked some roads in Southside, claimed that Pugu was in bed in his house on Stevens Lane when a police-military team stormed the premises.

The residents said shortly after five in the morning, two or three muffled explosions were heard.

They were later told that the mother of Pugu's children had been taken out of bed and Pugu killed by members of the security forces.

"Dem murder the good youth. Dem a killers, and dem can't claim that there was any shoot-out," declared a resident.

"Dem did put him name on the radio say him was a person of interest, and him turn himself in, and dem question him and release him. If him did want, you think him would sleep in him house?" another resident asked.

The residents, mostly women, described Pugu as an area leader who ensured that they could walk in peace and not be raped in the community.

Councillor for the Rae Town Division, Rosealee Hamilton, was among those raising questions about the killing.

She said there had long been reports on the street that the police were going to kill Pugu.

"I heard that on more than one occasion. I had spoken to him about it and told him to go to the human-rights groups and the police commissioner, but all he did was send his stepfather to the superintendents in the area to ask them why them want to kill him," Hamilton charged.

She said Pugu turned himself in to the police on three occasions and they did not charge him for any crimes.

"All of us have our faults, but he is a person that you could talk to and he would listen," Hamilton said.

However, the police insist that Pugu was a key player in a gang war which has left several persons dead or injured in Southside in recent weeks.

According to the police, Pugu was involved in a power struggle for turf in Southside with Marious Davis, otherwise called 'Bredda- Bredda', which caused the recent upsurge in violence, especially shootings, in Southside.

Bredda-Bredda is wanted by the lawmen to answer to allegations of wounding with intent. He is also wanted for questioning in connection with a number of shootings in the area.