Biggy, a 'Gem' of a dancehall designer 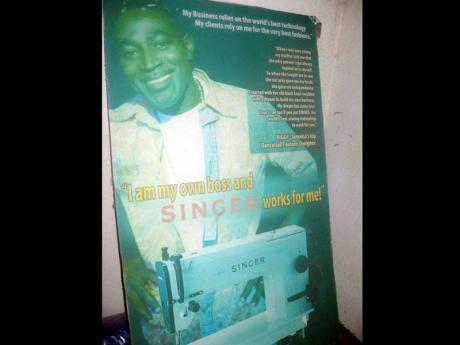 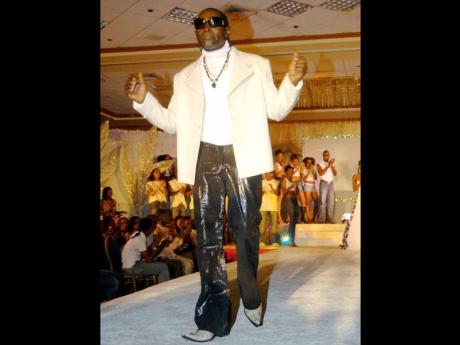 Biggy in a Singer advertisement. - photo by Mel Cooke
1
2

Three days before Rebel Salute 2010, designer Earl 'Biggy' Turner has a strip of white leather laid out on a work table at his Pembroke Hall, St Andrew, base.

Tomorrow night, the bright lights will hit the leather at the Port Kaiser Sports Club, St Elizabeth, when it is in motion on the body of Frederick 'Toots' Hibbert, one of the festival's headliners.

Biggy has been shaping leather to suit Toots' body and image for a long time and names the legendary Maytal and the late Garnet Silk as the best of the numerous artistes he has designed clothes for since he started out from Gem Road, off Waltham Park Road, St Andrew.

"When me put Toots as number one me put Garnet right behind him as number two. The rest come in any order. Me rate people on them standard and how them deal with people. Not even me, but the man who can't do nutten for him, is when him show that respect you know who the person is," Biggy said. "Garnet, God rest him soul, is a genuine bredda."

That 'rest' that Biggy talks about is virtually a roll call of dancehall's elite performers, especially those who came to prominence in the late 1980s to early 1990s.

Biggy reels off an A list of entertainers as effortlessly as a wholesaler would roll out a bale of cloth to slice off some yards - Pinchers, Shabba Ranks, Daddy Lizard, Red Dragon, Beenie Man, Ce'Cile, Freddie McGregor, Maxi Priest, Black Uhuru, Junior Demus, Half Pint, Junior Reid, Lady Junie, Wayne Marshall, Buju Banton, Tony Rebel. He says there was a time when Sting "come in like a Biggy stage show and all of the artiste have a different image".

But the first of them all was the man famed for his dressing, Pinchers.

"Me live a Gem Road, opposite Fitzgerald Avenue where Pinchers live," Biggy said. "Him hear say me can sew. Him say him a test me, sen' a piece a red gabardine." Pinchers sent it with someone else, not deigning to visit himself. Biggy made the shirt and returned it and Pinchers was moved to visit Biggy himself.

"Mi hear a bike draw dung at the gate. Him stop and say 'my yute, the shirt wicked. Mek mi see the clothes whey u wear fe yourself'," Biggy recalled.

Pinchers ended up taking two of Biggy's suits and ordering two more just like the ones he saw in the closet.

The artistes started coming after that, but location became a problem. As he was doing lots of designs for artistes affiliated to Supreme Promotions, Biggy approached Isaiah Laing, who accommodated the designer in an office which he had opened.

Biggy's favourite design is the one he did for Shabba Ranks' first Grammy appearance, which made it into the pages of Time Magazine.

"The man get a suit. Up to now nuh man nuh know wha him get," Biggy said, comparing it to what Lady Gaga is wearing now.

It proved to be a defining moment for the designer, as "after that no man no ask me nutten. Them jus' come with the money". He also did the designs for Shabba Ranks in the Housecall and Ting a Ling videos.

Apart from the big stars, Biggy points out that he also does work for corporate clients such as Digicel, Magnum and Guinness, as well as women who are simply dressing up to go out to an event.

"Ghetto girl keep fashion alive. Them wear the clothes good," Biggy said, noting that while some of them operate small businesses which bring in income, the bulk of the purchasing power comes from men.

His international appeal results in Biggy sometimes putting clothing on persons he has not laid eyes or an inch measure on. Still, he uses his savvy to make the cut.

"Mi realise when mi no see the person it fit better. A girl call mi and say 'Biggy, how you do my measurement on the phone and it fit mi so and in Trinidad when them measure me all 10 times it no fit me so'," he said.

Biggy chuckles as he says "Mi know how woman stay. When you get the exact measurement them say make it little tighter. Them tief that couple inches, so if you can help them tief it, a so."

And the Internet - specifically Facebook - provides a source of recurring business, as women put up their party pictures on Facebook and dare not be seen in the same outfit again. Even if they do wear it to another party, they certainly will not repeat too soon and come back to Biggy for more clothing.

"Me glad fi Facebook," said Biggy, who does designs through biggy_designs@yahoo.com.

Ironically, he was trained in working with the electricity which keeps a sewing machine running before he returned to the designing he learnt from his mother, after doing a stint with the Jamaica Public Service Company. Biggy also wanted to be involved in music from a different angle, doing guitar lessons with Sparrow Martin.

"Mi vex how it nuh work out, because that was my fantasy," he said.

However, he points out that "how me a sew with quality, a so mi woulda deal with it".

Choice of fabric is critical to that quality product, Biggy saying that the material "must be compatible with the style mi going to make it for. When you done the quality work you do must reflect the material."

He acknowledges that he has not paid as much attention as he should have to the business aspect of designing, despite having high-profile showings of his collections.

However, he plans to open a store in the near future and also to do a leather line with the Toots endorsement.

"Mi make mi name, make mi fame, make me living off machine. A fashion tek me round the world, nothing else. Mi love mi work. It mek mi interact with persons, preferably the females," he said.

Still, he says "Mi cyaa have a life. Is like clothes a mi life. Me love it still, but people rely on me so much. It put mi under pressure to fulfil people fantasy. But at the end of the day you feel good to know a man feel good when him a wear your design an' him say to you 'you know how much time your name call'?"

And he has a larger vision for his designs than the income.

"On this level you nuh do it fi mek money. You a sen' a message to the international market say this level of work a do a Jamaica. The money a go done a pay two bills. But when them make that impact deh!" Biggy said.