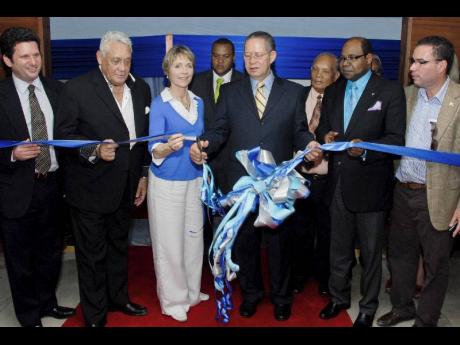 PRIME MINISTER Bruce Golding has said the decision to transform the Boscobel Aerodrome, now expanded and renamed the Ian Fleming International Airport, was a strategic decision taken to upgrade it to handle small jets, international arrivals and to attract the high end of the tourist market.

He said the Government has recognised that there were segments of the leisure market that it has not made an attempt to break into - the higher end.

Golding was speaking on Wednesday at the official opening of the facility in St Mary.

Golding said while Jamaica did remarkably well in the mass end of the market, which has formed the backbone of the tourist industry for a long time, it was recognised that there were other elements of the market that could bring added value, if Jamaica was able to entice them to the country.

He said the kind of visitors being targeted through this investment are persons who "... invest, they buy, they build and they create that added energy in the economy that we need so badly."

The prime minister noted that these visitors were not interested in driving several miles to get to their destination, adding that government provided the facility to encourage investment in the eastern section of the island, where there is potential for further investment in tourism.

He urged local investors to recognise the new opportunities being created for them as the airport expansion was a significant investment of confidence in Jamaica's future.

Golding also used the occasion to explain the decision to name the airport in memory of Ian Fleming, the British writer and creator of the world's most famous fictional spy, James Bond. He noted that there were several sons of the soil after whom the airport could have been re-dedicated. However, Golding explained that Ian Fleming gave Jamaica an image much larger than it would otherwise have had, as this was the place where the creativity emerged that enabled him to write 13 James Bond novels. "We also considered that the market to which we are appealing is a market to which the name Ian Fleming would have some resonance. We genuinely wanted to honour the memory of Ian Fleming because of all that he has achieved and the extent to which he brought Jamaica into that achievement...and we wanted to take advantage of his celebrity status."

The prime minister expressed Jamaica's gratitude to family members of Ian Fleming who were special guests at the function, thanking them for lending his name for which no royalties were charged.