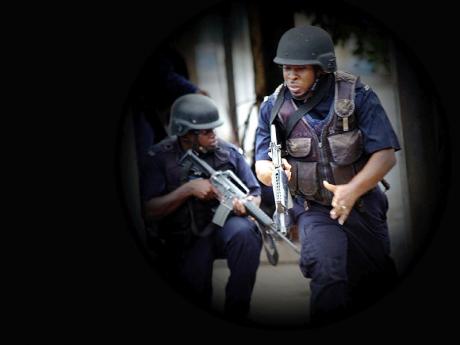 Policemen on the alert during the Dudus uprising in May 2010. Will the Government be brave enough to eradicate the garrison culture islandwide? - File

In the seven months since Christopher 'Dudus' Coke was extradited and his Tivoli stronghold dismantled, the homicide rate has plummeted by 35 per cent. No doubt, the uncompromising manner in which police now deal with persons of interest has contributed to the decline.

While Commissioner Owen Ellington's aggressive targeting of corrupt cops, and the efforts to improve police and community relations, seem to be bearing fruit. Jamaica remains one of the most murderous countries on earth.

Many things contribute to this, including fatherlessness, entrenched class inequalities, and drug gangs. But one of the major facilitators is unquestionably the existing relationship between criminality and politics. Retired Senior Reneto Adams claims there are more than 80 communities across the island besieged by criminal gangs, many formed with the complicity of politicians seeking to create safe political enclaves, better known as garrisons. We all know that if it 'nuh guh suh, it near guh suh'. And Jamaica can never become a prosperous and peaceful nation while so many of its citizens suffer under the evil system of garrisonism.

Russians and South Africans now marvel that millions once considered Marxist dictatorship and codified racism acceptable. So, too, will future Jamaicans wonder how anyone could justify the murderous guns-dons-politicians nexus that condemns so many inner-city residents to poor, brutish and short lives.

A few voices are calling for change. On January 5, the Jamaica Chamber of Commerce expressed concern that the Government's post-Tivoli invasion commitment to dismantle garrisons has failed to materialise. Last December 4, the National Democratic Movement (NDM) released an open letter to the prime minister which stated: "Central Kingston MP Ronnie Thwaites recently proposed that the Manatt commission of enquiry should include an investigation into possible connections between political parties and criminal elements, in particular any connection between the JLP and the Shower Posse.

"It is certainly in the nation's interest to expose any such link. What was missing from Deacon Thwaites' statement, however, was the need to investigate all possible connections between criminal elements and our political fraternity!

It is widely held that one of the main deterrents to controlling crime is the continuation of such relationships, whether explicit or implicit. The logical first step would be to examine those areas where there is the greatest possibility of uncovering such relationships, namely in so-called garrison constituencies.

An authentically implemented garrison commission of enquiry would expose any such existing connections, and remove the legitimacy many criminal gangs enjoy by virtue of their political connections. It would go a long way towards helping this country become an acceptably peaceful one."

The NDM release listed the following as garrison constituencies sure seats in which gangs and guns play a major role in determining which party people vote for.

As to whether this list is accurate, well that is exactly the kind of thing a commission of enquiry could tell us! Of course, any enquiry would require precise definitions, analyses and recommendations to avoid the red herrings politicians use to distract the public whenever this issue comes up.

Since Jamaicans live in communities, not constituencies, it is important to distinguish between 'garrisons' and 'garrison constituencies'. Political garrisons are neighbourhoods or communities where the right to a free vote is circumscribed by intimidation in other words, many citizens are not able to vote as they wish, but are forced into supporting the party that 'run t'ings' in their area. A garrison constituency is one where garrison elements are so significant that they preordain the outcome of the election in that constituency.

We have heard endless discussions about Tivoli being the 'mother of all garrisons'. But a mother, by definition, has children. With 'Mumma' Tivoli disarmed, why are our media not spotlighting all garrison constituency MPs and constantly urging them to emancipate themselves and their constituents from political mental slavery?

Despite the constant verandah and bar talk about garrisons, there has been no sustained public discussion on the matter. Some say our older politicians have so internalised the phenomenon that they can see nothing wrong with how Jamaican politics is conducted, despite our obscene homicide explosion from four per 100,000 in 1962 to more than 60 per 100,000 in 2009, perhaps the most murderous increase ever experienced by a country not officially at war.

Hoping them to be more enlightened than their elders, I have publicly challenged the main political youth arm leaders Delano Seiveright of G2K, Raymond Pryce of the Patriots, and Damian Crawford of the PNPYO - to hold a non-partisan conference on garrisons. All have given lip-service assent but done nothing to follow up their promises.

What explains this almost universal 'see no evil, hear no evil' mindset, I cannot say. But even when our press occasionally highlights the evils of garrisons, it often does so in a condemnatory holier-than-thou manner which kills discussion before it starts. In the 1997 leadership debates, Bruce Golding admitted to having associated with gunmen. Instead of commending him for telling even half-truths, and calling on all garrison-associated politicians to come clean, the media largely condemned him.

Not surprisingly, all politicians since then have maintained that they have nothing to do with the guns that appear in their constituencies seemingly by magic, and that they work only with upstanding community organisers and innocent corner youths, with 'area dons' and politically affiliated gangs being a figment of the public's imagination. Our media disgracefully allow them to keep up this charade.

Who doubts that political necessity has caused most, if not all, of our senior elected leaders to deal with known criminals? Michael Manley led Burry Boy's funeral procession and Edward Seaga led Jim Brown's, while Omar Davies and Peter Phillips were in the front row at Willie Haggart's memorial service.

Communism and apartheid made countless 'good men' commit crimes, and no doubt many inwardly 'decent persons' have felt compelled by our garrison system to do things they were ashamed of.

The enemy is all of us

Indeed, have we not all in some way been complicit in allowing garrison politics to flourish? Garrison consti-tuencies help make up every Government's parliamentary majority, and no MP can claim not to be part of our well-established principle of collective responsibility. Nor can our academic, business or church leaders feign ignorance. The enemy is all of us.

National degarrisonisation can only begin with a united call by Jamaicans, led by prominent civil-society spokespersons. The press must state known realities and call names on the front page. Of course, sustainable change will require us to confront perceptions of inequality and injustice. A garrison, after all, is not just a geographical location, but a culture and a state of mind.

We will also need some mechanism to facilitate the unburdening of guilty consciences and the speaking of unpleasant facts, perhaps a properly conducted truth and reconciliation commission.

Leadership starts at the top. In the 2006 Budget Debate, Bruce Golding challenged Portia Simpson Miller to walk hand in hand with him through the inner cities. Ms Simpson Miller accepted the invitation. Our media and opinion shapers must remind our leaders of their promises, and urge them to spearhead the creation of a post-garrison Jamaica.

The real question, as always, is - do we truly desire a peaceful and prosperous country?

Email feedback to columns@gleanerjm.com and kobchang365@gmail.com.