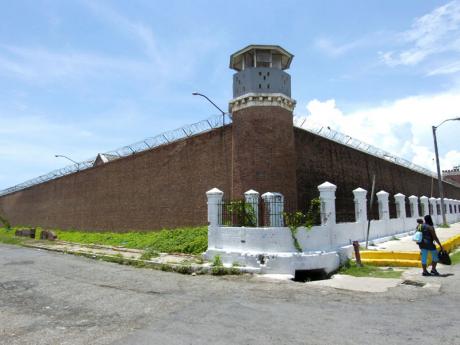 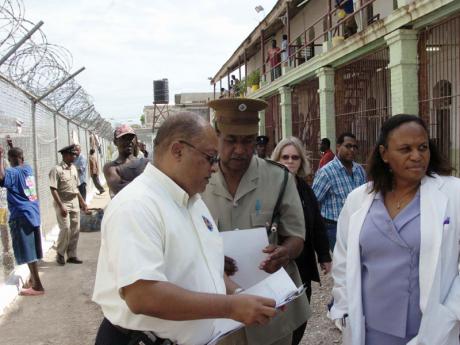 In this file photo, former Commissioner of Corrections Major Richard Reese (left) is in discussion with Superintendent Sylvester Lindo (centre) at the St Catherine Adult Correctional Centre. Also in the picture is Dr Marjorie Vassell (right), prison doctor. The occasion was a tour of the refurbished psychiatric wing of the prison in March 2006. - File
1
2

Citing possible human-rights violations, consultant forensic psychiatrist Dr Clayton Sewell is warning that a public-health nightmare could be triggered within the nation's penal institutions because of the highly unsanitary conditions in which mentally ill inmates are forced to exist.

Sewell, who conducts monthly assessments of the mental state of offenders to determine if they are fit for trial, recently concluded a study examining the differences among male mentally ill prisoners in Jamaica and England and Wales.

Sewell found that mentally ill prisoners are kept in conditions worse than those of inmates of sound mind.

"I believe this is so because they need a certain level of supervision. Their personal-hygiene needs are not being met. This is manifested in the continued decline in the well-being of the inmates. Their clothes are left soiled, and their location is left soiled as well," revealed Sewell, who attempted not to be too graphic with his description of the situation.

"Many of them need assistance, particularly the elderly," added Sewell, who pointed out that other mentally ill inmates are the ones who have to be caring for those who cannot help themselves.

There are definite public-health concerns associated with that sort of occurrence, the forensic psychiatrist told The Sunday Gleaner.

Sewell described many of the mentally ill in the nation's prisons as debilitated and infirm men who are in need of care.

"The situation is sad. Jamaica has signed on to a number of human-rights charters in terms of protecting the rights of the mentally ill, (and) I think that it can be argued that we are in violation of some of the human-rights agreement we've signed on to with regard to our treatment."

Sewell called for a dedicated mental facility for mentally ill offenders. "This goes back to the need for a specialised service to continue managing these individuals, many of whom are not high risk," he said.

Prisons are not the place for mentally ill offenders because the penal system is not about treatment. "The special needs of this offender population are never adequately addressed," he noted.

Deputy Commissioner of Custodial Services at the Department of Correctional Services (DCS), Gile Campbell, has, however, pleaded ignorance to the charges levelled by Sewell. "I don't know about that. That's news to me," Campbell said before referring our news team to Commissioner of Corrections Lt Col Sean Prendergast for further comment. Efforts to contact Prendergast were unsuccessful.

Meanwhile, human-rights activist and spokesperson for Jamaicans for Justice, Susan Goffe, said the violation of the human rights of incarcerated mentally ill persons was an ongoing problem in Jamaica. "It would not surprise me that the conditions continue to be appalling for many of the mentally ill," she said.

The comparative study done by Sewell in tandem with Professor Frederick Hickling and Vanessa Paisley has shown that Jamaica has a larger number of mentally ill persons in its prison system when compared to other parts of the world.

The cross-sectional study, which consisted of male offenders age 18 years and over, also showed that "more violent offences were committed by Jamaica's mentally ill offenders when compared to the United Kingdom (UK)".

"That speaks to the fact that we have a more violent society here than in comparison to other parts of the world, and that would also apply to the mentally ill," Sewell told The Sunday Gleaner.

Sewell's analysis also determined that mentally ill persons are incarcerated for longer periods in Jamaica than in the UK or Wales. The deficiencies in the local justice system, which cause and are compounded by massive backlogs in court cases, prevent the mentally ill prisoner from having his case tried in a timely manner, Sewell explained.

The mentally ill offender often spends more time behind bars than a person of sound mind. "If a mentally ill person gets charged with malicious destruction of property or any other minor offence, that person may end up spending more time in prison than if they weren't mentally ill," Sewell concluded from the analysis carried out among the prison populations at the Tower Street and St Catherine adult correctional centres in Jamaica, and the HMP Belmarsh, Forest Bank, Manchester, and Wymott prisons in England and Wales. The local prisons used in the study are the two major facilities for imprisonment of male offenders in Jamaica.

In the final analysis, Sewell determined that Jamaica's system was not on par with the systems operated in the UK and Wales. He contends that the gap has been caused not only by the island's lack of resources when compared to its wealthier counterparts, as would be argued by some critics, but by legislative issues and timeliness of the judiciary in addressing the cases of the mentally ill. In addition to the lengthy delays which deny justice for the mentally ill, the forensic psychiatrist also chided the "deficient legal-aid service".

"The mentally ill do not have adequate representation when they appear before the courts, and I think that works against them as well," Sewell said.

Jamaican prisoners were just over two times more likely to be incarcerated for violent crimes (74.3 per cent) and drug offences (2.1 per cent) than persons from England and Wales (33.1 per cent and 0.8 per cent, respectively).

The sample of Jamaican offenders tended to have a longer length of incarceration and no previous convictions, with most being incarcerated for over four years at the time of the study as compared to the offenders in England and Wales, who stayed no longer than three years.