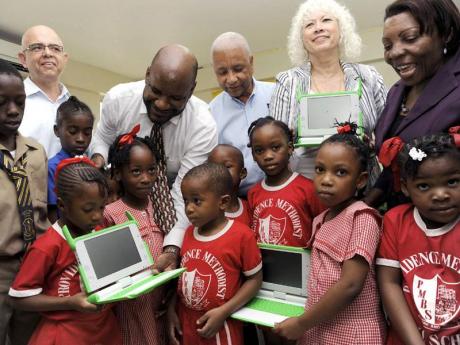 The children of the August Town Primary School and Providence Early Childhood Institute can now boast that in a technological age, they too are technologically savvy like other children in developed countries thanks to the One Laptop Per Child project.

The One Laptop Per Child project was launched at the Providence Early Childhood Institute in Liguanea, St Andrew last week. One hundred laptops were donated to the schools by the Project for Advancement of Childhood Education (PACE) Canada in partnership with the Mona School of Business, San Francisco State University and the Early Childhood Commission.

Diana Burke, former director of PACE, explained that the project was geared toward educating students through technology.

"I think there is no job we now do without a computer. A computer is important for preparing the kids for the future," said Burke while adding that the ages of zero to six are the most critical years for learning and children in those years require special attention.

According to Olivine Burke, co-ordinator of the UWI Township Project, sponsors of the project, researchers at the university including the late Professor Barry Chevannes saw the project as a way of reducing crime and contributing to the wider community.

The laptops, programmed with educational software capable of performing like any ordinary laptop but made just for children, were built by volunteers from the Massachusetts Institute of Technology (MIT) in the United States.

When The Gleaner asked little Makada Miller of the Providence Early Childhood Institute what she thought about the new laptops her school was receiving she answered :

" I love it because it green and white and it look like a toy."

Her fellow schoolmates seemed to have shared the same sentiment as they huddled around the laptops curiously exploring and each wanting time with the device.

Errol Miller, chairman of the Lime Foundation presented the One Laptop Per Child project with $1 million.

"The marrying of computers and telecommunication companies signifies advance in Jamaica. Jamaican children are as bright as any other children in the world. The only thing they may lack are resources," declared Miller.