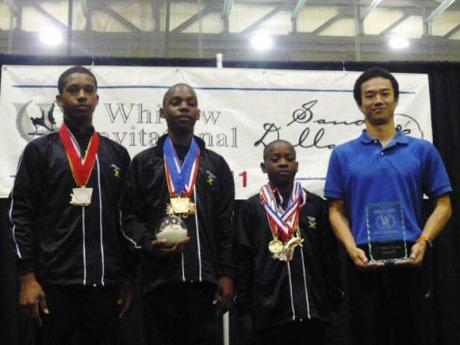 From left: Jamin Melbourne Levy, Daniel Williams and Jiovannua Jackson, along with coach Shin Nishida, pose with the trophies and medals they won at the 12th staging of the Whitlow Invitational for men in Orlando, Florida. contributed

Jamaica's sporting representatives have consistently produced sterling performances on the international stage. Three young gymnasts - Daniel Williams, Jiovannua Jackson and Jamin Melbourne Levy - are the latest to have done so, as they combined to capture the team gold medal at the 12th staging of the Whitlow Invitational for men.

The competition, which was held in Orlando, Florida, over the weekend, is the top men's gymnastics event in the United States and has produced Olympians.

However, this year's staging marks the first occasion that Jamaica has sent representatives to the contest.

The three boys competed in the men's gymnastics level-eight category. This leaves them with a mere two more levels before reaching the elite level, at which they will be technically qualified to participate in world-class competitions.

Williams, Jackson and Levy, who are all members of Nishida's Gymnastics and Fitness Centre, topped 13 other teams to take the gold medal. They amassed 218.4 points, as they won four out of the six events.

Thirteen-year-old Norman Manley High School student, Williams, who started gymnastics at age seven while attending New Day All Age and Junior High, captured two individual gold medals, a silver and a bronze to finish as the overall top-scoring level-eight competitor from a field of 32. He was also first in the 11-13 age group category with a total of 73.55 points.

Jackson finished runner-up in the 11-13 age group by only 0.10 points, having accumulated 73.45 points in capturing his three individual gold medals, two silver and one bronze. He too, like Williams is 13 years old and started in the sport at age seven while attending New Day All-Age and Junior High. He is currently enrolled at St Joseph's High School.

Fourteen-year-old St George's College student Levy started at age six with Ishimoto's School of Gymnastics. He took second overall in the 14-15 age group from a field of 11 competitors, having garnered a total of 71.4 points in winning four individual gold medals and one silver.

The boys, who returned to the island near mid-day yesterday, competed in a total of six events - parallel bars, high bars, floor, vault, rings and pommel horse.

They will now turn their attention to the 16th Pan American Games, which will take place in October this year in Guadalajara, Mexico.