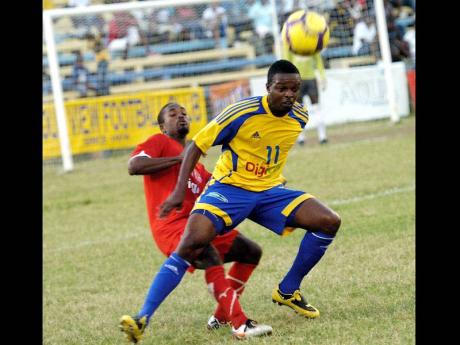 Striker Fabian Taylor made a return to Harbour View's line-up yesterday, but this was not enough to stop his team from having to settle with a point following their 0-0 draw with Boys' Town in Digicel Premier League action at the Harbour View stadium last night.

The fleet-footed Taylor, who was greeted with rapturous applause following his introduction in the 66th minute, has been out of the game since last season when he picked up a knee injury while playing in Norway for Notodden FK.

The injury was his second in two seasons as prior to the knee ailment he had suffered a broken ankle, which also kept him out of action for months.

"I have had only two weeks of full training, however, coach Donovan Hayles decided to throw me in nonetheless," said the 30 year-old Taylor.

"I thought it was one of our worst games as we were not playing the free-flowing football that people have come to know us for. But I guess the good thing is that we did not lose, and is for us to bounce back," he added.

And he was indeed correct. Bereft of a number of their regular starters due to either injury or suspensions, including Marcelino Blackburn and Romario Williams, the hosts were taught a football lesson by Boys' Town, who camped out in their half, and created goal scoring opportunities at a ratio of 5:1.

The result means both teams crept up a point in the standings while leader Tivoli Gardens increased their advantage to six points with a massive 2-1 win away to Waterhouse to move their tally to 55 points. Boys' Town (49 points), Portmore United (48), who drew 1-1 with Sporting Central and Harbour View (46 points) round out the top four.

However, let down by faulty finishing, fairly good goalkeeping from Michaud Barrett and at times stout defending, the visitors could not get on the score sheet, a fact which had Campbell, Boys' Town's captain, expressing disappointment.

"We were a bit unlucky not to score, as we moved the ball around well and created good scoring chances," he said.

"But that's how it goes sometimes. We just have to try and do better in our next game.