Make-up, 'madness', music at Jazz in the Gardens 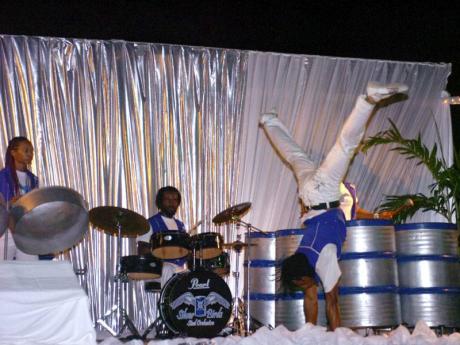 The Silver Birds in performance. - Contributed

Now in its 11th year, Jazz in the Gardens, The Jamaica Pegasus hotel and Capital and Credit Financial Group presentation, continues to offer regular, good-quality jazz concerts to aficionados of that musical form.

Sunday night's concert, subtitled 'Sounds from the Coast', featured some experienced favourites as well as a few newcomers - to the venue, not to entertaining, that is.

There were a number of curious events during the evening, one being super-suave MC Michael Anthony Cuffe's role in smoothing over a family squabble.

The story told to the audience was that the male half of a Bahamian couple which had come to Jamaica specially for the concert wanted to publicly apologise to his wife for something he had done on arrival in the island, something he claimed she misinterpreted. Cuffe called both parties to the microphone at the foot of the stage and the wife first addressed the audience about the importance of husbands telling their wives how much they are loved and vice-versa. Next, the husband uttered the three words wives most delight in hearing: "I humbly apologise."

After a quick embrace, the couple, which had apparently been apart earlier in the show, went back to their seats together.

There was still another odd bit of drama - odd for a jazz concert, that is. A performer, Nana Moses, who is also a writer, producer and minister of religion, came on dressed like a street person, in ragged clothes and carrying plastic bags and bottles.

In a rather forceful manner, he launched into a stand-up comedy routine about some people being not mad but compelled by circumstances to live on the streets. He left the stage briefly and returned in a grey suit to perform two poems - Woman and, in tribute to Black History Month, Young, Strong Black Woman. Both were more declamatory than poetic; still, they found favour with the easy-to-please audience.

The opening act JaSoul - four young men in black and white - backed by the band Scrimmage, started off with a Stevie Wonder song, Sir Duke. Interrupted for about 10 minutes by 'a power surge,' they returned with Write Your Name Across My Heart, a song in which the harmonising worked well, and then Beenie Man's Nuff Gal, which did not work, despite the harmonising.

The "illustrious" (Cuffe's description) Dennis Rushton and Friends was the second act. The nattily dressed Rushton (keyboards) led his band (Paul Madden on bass, Courick Clarke on keyboards, and James Valentine on drums) in a couple of contrasting opening pieces. One was the lively jazz standard Take Five and the other the quieter, melody-filled title song from The Sound of Music.

The group backed the next singer, Nina Karle who, though she has been performing for some 15 years, was new to the Pegasus concert series. Karle showed off her flexible voice with Body and Soul, Cry Me a River and I Put A Spell On You.

Claudette Miller started off with On a Wonderful Day Like Today, giving the song the tremendous energy she was to display for the remainder of her 45-minute set. This was, in fact, a revue, complete with about four dancers and two male back-up singers. The harmony pauir, Karyl Wisdom and Lance Rhoden, also performed a couple of songs as a duo. They were Kissed From a Rose and This Time Could Mean Goodbye. With Miller and the dancers in sync with them, they sang Hey Big Spender, Kiss Me Honey, Honey, and The Time of Your Life, among other songs.

In the highly entertaining revue, Miller was also joined by friend and singer 'Connie', who assisted with singing Neither one of Us (Wants To Be the First to Say Goodbye) and Nina Simone's My Baby Just Cares For Me.

The next concert in the Jazz in the Garden series will be on May 1.