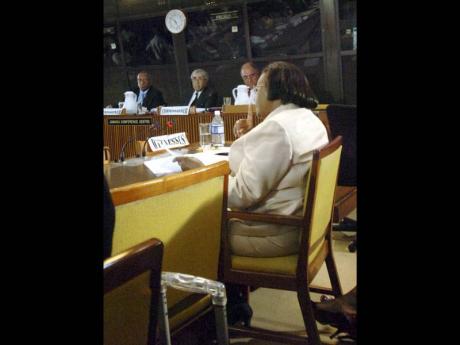 Dorothy Lightbourne, the minister of justice and attorney general, testifies at the Manatt-Dudus commission of enquiry yesterday as commissioners (from left) Anthony Irons, Chairman Emil George and Donald Scharschmidt look on at the Jamaica Conference Centre in downtown Kingston. - Norman Grindley/Chief Photographer

Lightbourne, who made the startling allegation at the Manatt-Dudus commission of enquiry, was promptly tackled by Knight as well as the attorney representing the Office of the Director of Public Prosecutions (DPP), Lord Anthony Gifford.

Taylor heads the arm of the DPP's office that represents the United States in extradition matters in the local court.

The enquiry was told that Coke would have been promptly arrested on a provisional warrant, pending the receipt of a formal extradition request.

Under the provisions of the Mutual Legal Assistance Treaty (MLAT), the United States would be given 60 days to send the formal request while Coke languished behind bars.

Under intense pressure from K.D. Knight, the attorney representing the People's National Party (PNP), Lightbourne claimed Taylor should have advised the US authorities to dispatch a provisional warrant to Jamaica instead of a formal extradition request.

Knight: "But even if they applied for the provisional warrant, wouldn't you still have to sign the authority to proceed (extradition request)?"

Lightbourne: "I would have nothing to do with that, he would be arrested before ... ."

Knight: "That is the procedure you had wanted the US Government to follow?"

As silence gripped the already tense atmosphere, Knight asked Lightbourne: "Are you saying that Mr Taylor gave the US the wrong advice?"

Lightbourne responded that the MLAT makes special provisions for provisional warrant in the case of emergency.

Knight: "Should the provisional warrant be used in the Coke case?"

Lightbourne: "Based on Mr Taylor's evidence that he was told that the matter was urgent."

Knight: "He gave no such evidence, did the Americans behaved as if the matter was urgent?"

Lightbourne maintained that it should have been the decision of the US to use the provisional warrant.

"The requesting state, and Mr Taylor said he advised them," asserted Lightbourne.

Knight queried whether Lightbourne was prepared to say that the provisional warrant would have been the better route to extradite Coke.

However, the attorney general evaded the question.

"The approach of the US was wrong, they were wrongly advised," she said.

Knight wanted to know what was wrong in the use of the formal extradition request.

However, Lightbourne said that Taylor had given evidence that the US had said the matter was urgent.

This elicited a strong reaction from Knight.

"There was no such evidence. Mr Taylor said no such thing."

It was at this stage that Lord Gifford intervened in support of Knight.

He told the enquiry that he checked records of the conversations between Taylor and the United States Embassy and found nothing to suggest that the matter was urgent.

However, Lloyd Barnett, the attorney representing Lightbourne, contended that former Commissioner of Police Rear Admiral Hardley Lewin was called and asked why the extradition request was not signed even before the authenticated document had reached Lighbourne's hands.