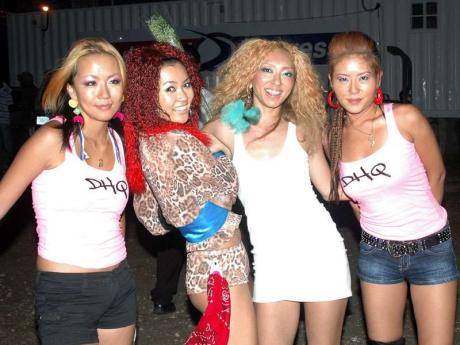 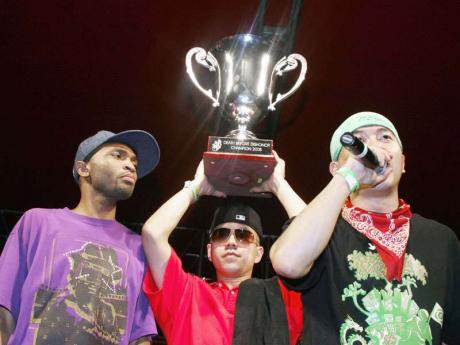 Mighty Crown selectors raise their trophy after winning at Death Before Dishonour in Montego Bay, St James, in March 2008. - File
1
2

Whether it is Jamaican performers going to Japan or Japanese fans coming to Jamaica to liberally populate dancehalls and stage shows, the Land of Wood and Water and the Land of the Rising Sun have a long-standing musical connection.

Last July, Dr Noriko Manage, assistant professor of musicology at Princeton University, spoke on 'Locating the Japanese and the Jamaican in Japanese Reggae/ Dancehall' at the University of the West Indies (UWI), Mona campus. She spoke to reggae taking root in Japan in the early 1970s with the movie Harder They Come, starring Jimmy Cliff, The Wailers album Catch a Fire, and The Clash's London Calling album.

The Japanese reggae decade closed with Bob Marley's 1979 concert there. The 1980s saw the Japanese adaptation - the opening of the reggae store Black Hawk, a reggae magazine in 1981, and a record label in 1985. All that led to the Japansplash, which peaked in 1997 with an attendance of 50,000 persons in Tokyo.

Then there were the Japanese performers who came to Jamaica, Naki staying with Sugar Minott in 1984, and Rankin Taxi visiting in 1983.

Manage pointed out that many of the Japanese reggae/dancehall standouts are from minorities in Japan. The brothers who run Mighty Crown are of Chinese heritage, performer Pushim is Korean. Minorities face discrimination in Japan and Manage quoted Mighty Crown's Master Simon, responding to questions about minorities, saying, "I see it as a sign that race and ethnicity do not really matter in reggae."

She also explored the similarities between Jamaican patois and Japanese, both melodious languages. Patois' grammar, she said, is more reminiscent of Japanese than English.

Even without Dr Manage's lecture, the Japanese presence in Jamaican music is impossible to overlook. Junko Bashment made headlines in 2002 when she won the annual Dancehall Queen competition in Montego Bay, St James, and - unlike many past winners - she has continued to have a presence. MoBay seems to be fertile ground for the Japanese in competitively staged dancehall, as in 2008, The Mighty Crown beat all comers on Easter Monday to take the 'Death Before Dishonour' sound system clash title.

While Mighty Crown has had the lion's share of Japanese sound- system publicity, they are not the only ones who have made it to Jamaica, Barrier Free playing at last year's Fully Loaded sound system-based event in Port Royal.

The Japanese market has proven lucrative enough for a number of artistes to release material there exclusively, among them TOK, Chino, Voicemail, and Konshens.

And apart from releases, there have been music moves made in Japan. In an April 2010 interview, bass player Mikey Fletcher told The Sunday Gleaner that in 1994, the 809 Band, of which he was a part, played for Shaggy, who was breaking out with the Oh Carolina remake. The following year, Shaggy brought his own band, then a different set of musicians in 1996. Dissatisfied with his band, he had the 809 rhythm section of Fletcher, Paul Kastick, and Christopher Birch form the new Shaggy band that did the Boombastic tour of 1996.