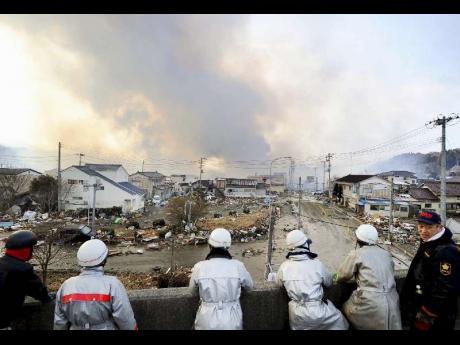 Jamaica's Ministry of Foreign Affairs and Foreign Trade reported late yesterday that it has located all 10 Jamaicans on the Japan Exchange and Teaching Programme and who lived in the high-risk northern region hit worst by the quake. However, three more Jamaicans living in other areas have not been located.

"It's still a work in progress. Communication is a bit difficult at this time," said Dr Ken Baugh, minister of foreign affairs and foreign trade.

Baugh said his ministry would be setting up a special desk tomorrow to facilitate queries from concerned family members and friends of persons living in Japan. Preliminary figures indicate that the March 11 quake and the tsunami that followed have killed thousands of people.

Baugh said that the Jamaicans living in Japan that his ministry had contacted were fine and suffered no major injuries.

"We are doing all we can to make sure we have information about them. We don't have all the information at this time," said Baugh.

Of Japan and its ability to withstand the effects of this quake Baugh was confident. "I've spoken to the Japanese ambassador, [Japan is] a country well prepared and well designed in architecture," said Baugh.

The tears coursed unchecked down the face of Pamela Davis, a Jamaican living in New York, when she eventually found that her son, Ian, had survived the devastating 8.9-magnitude earthquake which rocked Japan on Friday.

Overcome with relief, Davis could barely speak as she uttered the words: "I am so glad."

Davis' mother had good reason to be overcome - her family was alive and well amid the rubble.

Hundreds did not survive the most severe earthquake to shake Japan, causing a tsunami that hit the shore with massive force.

The monstrous tsunami reportedly gushed over rocks in the bay, bringing in its path a wall of water.

"I am really glad that they are alright, for days I heard nothing from them," stuttered Davis yesterday, after hearing that her son and his family were safe. "But I am still broken after seeing those pictures," she wept.

Pamela's son, Ian Davis, an attorney-at-law, has lived with his family in Tokyo for the past seven years.

Efforts by The Sunday Gleaner to touch base with the Jamaicans in Tokyo failed as the numbers, both home and cellular phone numbers, rang out without being answered.

Pamela Davis said the devasta-ting scenes brought back memories of September 11, 2001 when the twin towers splintered on the fateful morning in New York.

Her daughter, Gaye Davis, an engineer, was working on Wall Street at the time.

She survived the ordeal nearly 10 years ago and now her mother lives with her in the United States.

Pamela Davis said the haunting memories came crashing back as the scenes flooded the television screens.

"When I saw Tokyo, I said oh no, not another one," she recalled.

Pamela said Ian's wife, Ackee Davis, could not locate her husband after the earthquake.

However, Ian eventually emailed his mother telling her that he had to walk for five hours but said that he was fine.