A nasty stain on the city: KSAC appeals to persons urinating on the streets 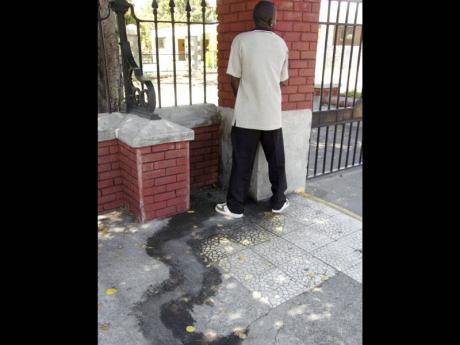 This man urinates outside the St William Grant Park in downtown Kingston, despite newly refurbished restrooms just a few feet away. 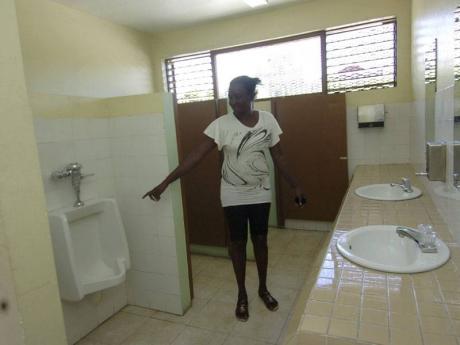 One of five restrooms in the St William Grant Park in downtown Kingston. - Photos by Norman Grindley/Chief Photographer
1
2

The all-too-familiar sight of men, and on some occasions, women urinating on the streets of downtown Kingston is becoming a real worry for business operators and others who travel to the market district.

"When you a walk past park (St William Grant) you have to a skip over pee," one angry shopper said.

A quick trip around the park shows the tell-tale urine stains at almost every column around parade with the smell threatening to cause an asthma attack.

"The place 'renk' and the man them no have no shame. Them just a mess up the place and a some big man them," another shopper said as she shared her disgust at seeing a man in dress suit and necktie urinating along the walls outside the park.

"You have to understand seh people want to pee and them no have nowhere to do it. This a the first major town me see without a public bathroom," one man argued after being caught in the act.

But that's not true, says Mayor of Kingston Desmond McKenzie.

He further noted that there is a public sanitary facility near Marcus Garvey Drive and Water Lane, metres from the new transport centre, which is being renovated.

A visit to the public bathrooms inside the St William Grant Park shows clean well-maintained facilities with attendants.

"We charge $30 to use the facilities and if someone come and say them have $20, we take it and even if them ask decent and say them no have no money we mek them use it," said Annette, one of the attendants.

"What happen is that some of them don't want to pay no money and them come disrespect we, so some of them do it for spite and pee anywhere," Annette added.

"Them have to understand that is the money that them pay buy the tissue and the cleaning supplies, but some of them just nasty," Annette charged.

Other public facilities in downtown Kingston were similarly clean, while some private-sector entities provided bathroom facilities for their customers free of charge.

Persons caught urinating in public can be charged under the National Solid Waste Management Authority Act or they can be charged for indecent exposure, but the penalties are small.