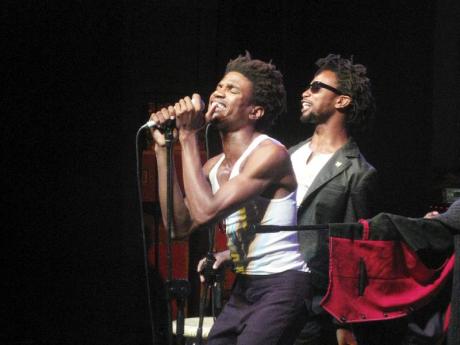 Sheldon Shepherd leans forward and Chris Gordon leans back as the No-Maddz perform at the Courtleigh Auditorium, New Kingston, on Sunday night. 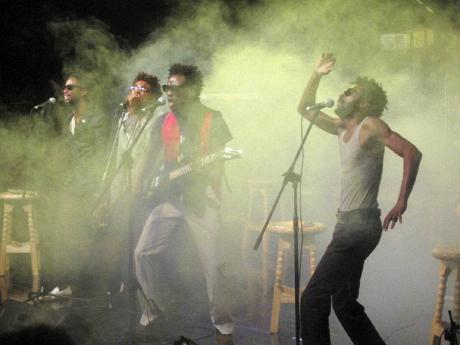 The No-Maddz members are shrouded in smoke at the Courtleigh Auditorium, New Kingston, on Sunday night. - photo by Mel Cooke
1
2

The range of beats that the No-Maddz poetry quartet, along with a four-member band, utilised for their tightly coordinated delivery (in sound and sight) on Sunday underscores how far they have come on their 'Trod'.

Chris Gordon, Sheldon Shepherd, Oneil Peart and Everaldo Creary, not only thoroughly entertained a packed Courtleigh Auditorium, New Kingston - although there was a marked decrease in occupancy of the upper tiers after the intermission - but also demonstrated their facility with a variety of genres.

So they started out with kumina, Shepherd as the quartet's primary voice leading the audience through an aural re-enactment of an alleged shoot-out with the police - or, in a sardonic dismissal of the official version of the incident, "so dem say". There was laughter at the line "dem try to aim at him foot, but him head get in the way".

At the end of the excellent Trod concert, dubbed the 'Anniversary Special', No-Maddz went full-blown rock with the cryptic Tell No One You Have Seen Me, bringing a high-energy end to what turned out to be a long night.

The concert also doubled as a fund-raiser for Eve for Life.

In between the kumina and rock No-Maddz rocked the house with well-known pieces, especially in the first half (the memorable Poo Puku Poo on the third number really got the cheers going), a reworking of Miss Lou's Roast Turkey and a reach back into their younger days for an early love poem.

There were many lines that resounded with the audience, including "after the ceremony and the wreath/nobody never come back and tell you death sweet".

Maybe just as important as those heartfelt lines, though, was the fact that the on-stage camaraderie among the No-Maddz continues to be striking.

It helped them get over what could have developed into a sticky situation as, in the post-intermission segment Peart found out that the sound from the acoustic guitar was not carrying to the audience.

"Jus' a check if the microphone a pick up the guitar cause me nah hear it," he said. Shepherd said, "make sure it a pick up because we a record the album. No second take at all".

There was a quick switch around of cords, but still no sound. Creary took the microphone from the drum close to him and set it up in front of the guitar. "Evy to the rescue!" Shepherd said, and all was well.

And there was laughter when, going for a dramatic moment, the stage lights were cut. "You cyaa lock off the light pon me, me cyaa see me frets!" Peart said.

The women were especially vociferous in their appreciation of No-Maddz. When a grinning Gordon said "hi ladies. Do you se my eyes ladies?", duly lifting his shades, they cheered. And when he delivered the line, "a no me eye alone big big big", they hollered in delight.

Coming up to the end of the post-intermission session, the No-Maddz varied personalities came out on a love piece which Shepherd said was written from "short pants days". It brought out their varied voices, Creary commenting on the lady's "natural hair to her shoulders mixed with sheen" and Gordon dropping the ghetto-style lyrics "when I kiss her lips it tastes like bulla and pear".

The band was introduced on the last poem; Creary bounding especially high, Shepherd issuing a final "this is No-Maddz; the Trod, join we nuh?" and complimenting the audience "oonu gwaan well".