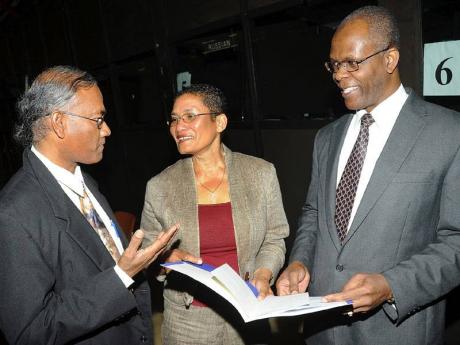 Easton Williams (left), chairperson and acting director, social policy planning and research division of the Planning Institute of Jamaica, chats with Dr Maria Jackson (centre), senior lecturer in the Department of Community Health and Psychiatry, University of the West Indies, and Cecil White, vice-president, operations, National Health Fund, just before the start of a dissemination seminar on prostate cancer in Jamaica titled 'The Contribution of Diet and Lifestyle Factors'. The seminar was held at the Jamaica Conference Centre in downtown Kingston yesterday. - Ian Allen/Photographer

An oversized abdomen can lead to prostate cancer, a new study shows. On the other hand, increased consumption of the Jamaican avocado can significantly reduce the risk.

The findings of a study on prostate cancer in Jamaica and the contributing factors of diet and lifestyle, conducted by a team of doctors led by Dr Maria Jackson, senior lecturer at the University of the West Indies (UWI), were presented in a dissemination seminar at the Jamaica Conference Centre in downtown Kingston yesterday.

"Abdominal obesity may be associated with risk of high-grade prostate cancer and the risk may be greater in those with a higher obesity relative to overall size," said Jackson.

In combating the chronic non-communicable disease, the study revealed that an increased intake of monounsaturated fats, particularly avocado as well as peanuts and roasted or baked chicken, could significantly reduce the risk.

Prostate cancer is the most common cancer in Jamaican men and the leading cause of cancer death. Traditionally, men shy away from the screening test mainly because it requires a rectal digital probe. As a result, it has been recorded that 50 per cent of men detected with prostate cancer were at an advanced stage when it is no longer possible for them to be cured.

"Men need to take the screening test. Early detection and treatment are important," said senior medical officer in the Ministry of Health, Dr Kevin Harvey, who shared that according to information from the World Health Organisation, by 2020 prostate cancer cases worldwide are expected to increase by 20 per cent.

Dr William Aiken, head of the urology department at the University of the West Indies, also added that early detection could make a 10 to 15-year life or death difference. He said recent studies showed that 78.1 in every 100,000 men worldwide had prostate cancer.

Cecil White, of the National Health Fund, said 8,600 of the men under the scheme were being treated for prostate cancer, which is costly.

"More needs to be done to educate men on prostrate cancer," added White.

The study revealed that although prostate cancer was related to age, race and genetics, a complete lifestyle and diet change could significantly reduce the risk.