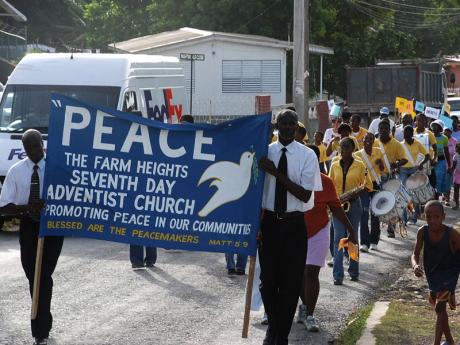 In this July 22 file photo, members of the Seventh-day Adventist Church march for peace in the communities of Farm and Rose Heights in Montego Bay. - Photo by Mark Titus

AN INTENSIVE social reformation programme to exorcise the twin demons of crime and violence from Montego Bay, St James, has started to stimulate a renewal of hope in several of the city's most volatile inner-city communities.

This rebirth is hinged to the Citizens' Security and Justice Programme (CSJP), which has targeted 10 of Montego Bay's hotbeds of crime.

"Our primary focus is on building community safety and security, so we have sought to embark on programmes, which empower the target groups after we would have done needs assessment and then tailored the programmes to fulfil those specific objectives," said Gillian Scott, CSPJ's social marketing coordinator.

She explained that the organisation has focused on risk factors for crime and violence to mitigate these and build resilience among at-risk youths in the targeted communities.

The communities that have been long regarded as the focal points for illicit acti-vities have begun to embrace the CSJP and its programmes. These include Flankers, Norwood, Rose Heights, Granville, Farm Heights, Mount Salem, Canterbury, North Gully, Salt Spring and Glendevon.

The CSJP, which falls under the Ministry of National Security, has also introduced an education component to its menu.

Since last year, scholarships have been awarded to more than 200 at-risk youths to continue their secondary and tertiary education.

"Montego Bay received the larger portion of the allocation of the scholarship programme, which was shared with the Kingston Metropolitan Area. It was important to ensure that as many person benefited as possible, based on the needs of the communities," Scott explained.

She further indicated that the students and their parents were hard pressed to "cough up" the money to pay the tuition fees, buy books and other necessities for school.

With the students empowered attention was turned to parents. Scott said in some cases inner-city communities suffer from dysfunctional families and this seriously impacts how the youth respond to others in their communities.

"Fifty-four persons were drafted to be trained as parent trainers and, of that number, 29 were contracted to the CSJP, where they are required to conduct life skills course and are given the mandate to engage at least 10 families every month."

The CSJP also launched a summer employment programme which recruited 80 youths from the 10 communities with each receiving a stipend.

Not satisfied that this was going to be all, the CSJP drafted a raft of new programmes, the first of which comes on stream in April.

Fifty paid internships will be granted in April as part of the continued programme to empower these young people, explained Scott.

Also to be implemented is a technology-driven project called the PRPT2, which is funded by the European Union. It will draft and train a number of young people in computer-related skills.

The impact of sport on the process of human development has not been lost on the CSJP, so the group is soon to launch Goals For Life.

"This is a sport engagement where 300 youth at risk will be involved.

This will take the form of a corner league, which will be matched or mixed with football theme life skills", Scott said.

The young people will be going through psychometric assessment to fit them into skill areas for which they are aptly suited.

Further to this, there will be a situation crime-prevention project in Salt Spring which was the area where five persons were fatally shot on April 26 last year.

Said Scott: "The youths will erect street and other directional signs in the community. This will allow for emergency services to be better able to find their way into the community. It is a way of the community self-developing by accepting and embracing and implementing projects, which transform and rebuild the area."

The CSJP working in these communities has been complemented by a sister government agency, the Social Development Commission (SDC).

Parish manager of the SDC, John White, told The Gleaner that 98 youths drawn from the hotbed communities have registered and are attending remedial classes at the old public works building. While these are doing classes, another 35 are awaiting their turn to improve their academic standing.

"When they have completed their classes, they will be enrolled in the HEART Trust/NTA for vocational skills training. This is a means of empowering these young people and keeping them away from crime," White said.