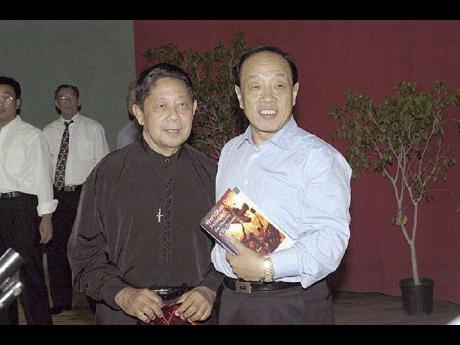 The following is the first of a new monthly series prepared by the Jamaica China Friendship Association, seeking to explore issues of Chinese history in Jamaica as well as ongoing relations between the two nations.

The first Chinese to arrive in Jamaica came as indentured labourers. Two groups arrived in 1854, one in July, directly from China via Hong Kong, the other in October from Panama. These were also labourers recruited to work on the Panama Canal. They found the climate and conditions in Panama unhealthy and asked to be sent to a healthier place.

The recruitment of Chinese and Indian workers for Jamaica was occasioned by the fact that the African slaves had won their freedom and rightly refused to work on the sugar estates for the paltry wages offered. Workers were necessary to save the declining sugar plantations in the Caribbean, which were then the main source of wealth for Europe, particularly Britain. Efforts to recruit workers from among their own people in Europe were unsuccessful so the estates, aided and abetted by the colonial government of the time turned to China, which was then experiencing severe hardships. Prolonged drought followed by devastating floods wiped out their entire food supply. This was aggravated by the Opium Wars and serious political rebellions. People were dying of starvation in south China.

Southern Chinese seeking a better life migrated to other parts of China and to other countries including the United States, Canada, Australia, New Zealand and India.

The majority of the people who migrated from China, then, came from Guan Dong Province, southern China, which has similar climate to Jamaica. If you take as the centre the City of Loong Gong, the majority of the migrants were all from within a 60-mile radius.

These people were from the Hakka national grouping, one of the 56 national groupings which make up the Chinese people - each distinguishable by culture, custom and sometimes physical features and language. Their history says they migrated from north China and settled in the south thousands of years ago when the emperor they supported was deposed. They are known for their industry and hard work. They are, as their name implies, 'guest people', that is, nomadic. When things do not suit them, they move on.

Chinese indentured workers were sent to sugar estates all over Jamaica. This first batch was sent to estates in St Thomas, St Mary, St James, Westmoreland and Portland. Soon, with subsequent arrivals, Chinese workers were to be found all over the island doing exactly the work the African slave was required to do. They planted cane and other crops, weeded, cut and milled the cane, boiled sugar, made the molasses, tended animals, put up buildings, worked as coopers, gathered firewood and many other jobs estate life required.

The life of the indentured worker was little better than that of the slave. Firstly, they had to agree to repay the full cost of their passage from Hong Kong. This was to be collected by their employer. The wages they were paid was very small and the conditions were such that many ended their three- to five-year employment owing money to their bosses. The living conditions were terrible. They were promised rooms with windows and paved floors.

But many of their quarters were windowless with dirt floors. They were also promised Chinese food; this was scarce and received on rare occasions. They were made to work sun up to sun down, seven days a week, with very little break. The harsh conditions led to the first recorded strike of paid workers in Jamaica, when Chinese workers at Duckenfield Estate in St Thomas staged a sit-down strike.

The estate owner employed some Africans and Indians to force them to work. There was a fight. Several persons were injured and one man was killed. However, the result was an improvement in some working conditions, for example, a six-day work week, with Sundays left as a day of rest when they could plant their vegetable gardens, an important part of their diet.

The Chinese, like the Indians and the Africans were made to feel infe-rior to the estate owners and were treated as less than human. The estate owners subtly and overtly set each group against the other, aided and abetted by the colonial government of the time, and it took a century and a half for people from each group to begin to trust each other.

Chinese immigration to the Caribbean continued in the 1800s, but the period of 1920 to 1933 saw the greatest number arriving in Jamaica not as indentured labourers, but mostly sponsored by relatives. By 1943, the census recorded more than 12,000 Chinese in Jamaica.

By the time the Chinese arrived in Jamaica, the Creole culture was being firmly established in Jamaica. The newly freed Africans were struggling to truly free themselves from the colonial oppres-sion of the past 300 years. Many Africans of note were beginning to emerge. And it was in this atmosphere that the Chinese found themselves.

It was this language that they learnt to speak and soon integration into Creole society began.

It must be emphasised that not all Africans who were brought to Jamaica were uneducated, unsophisticated persons. There were many professionals and well-educated persons among them; similarly, the Chinese and the Indians. It is erroneous to think they were all people of the working class, unskilled, unlettered. Many businessmen came and many university-educated persons, too. Because of the language barriers though, they had to be content with other occupations. But for many, migration was not an easy matter. Who were they really? What was their life like in their country of origin? That is the subject of our next issue.

Many businessmen came and many university-educated persons, too. Because of the language barriers though, they had to be content with other occupations. But for many, migration was not an easy matter.