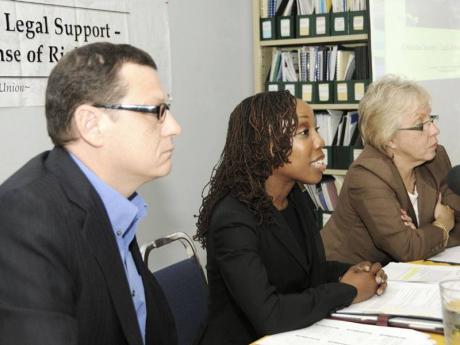 Chastises PM for not removing children from lock-ups

Incidents of human-rights abuses have rocketed to troubling heights in the aftermath of the bloody military operations in west Kingston, which claimed the lives of at least 73 people.

This is the charge laid down by human-rights organisation, Jamaicans for Justice (JFJ).

The group has communicated its findings to the Inter-American Commission on Human Rights (IACHR).

JFJ Executive Director Dr Carolyn Gomes yesterday revealed during a press conference in St Andrew that there has been a 41 per cent spike in human-rights-related complaints received by her organisation in 2010 compared with 2009.

"There continues to be a lack of accountability for human-rights violations by the security forces," argued Gomes.

"It's been reported that 73 people were killed during the incursion, although other estimates put the figure around 100," she charged.

With only a month to go before the anniversary of the bloody operation when the security forces swooped down on Tivoli Gardens to snare influential don Christopher 'Dudus' Coke, the wounds are still festering.

Gomes is frowning at the Government over its refusal to establish a commission of enquiry into the conduct of the military operation.

She charged that the Government continues to ignore the plight of those who have been abused as the abusers invariably go unpunished.

Gomes said since the May 2010 state of emergency, members of the security forces continue to think they have been given a carte blanche to run roughshod over the constitutional rights of Jamaicans.

The JFJ executive director said the 41 per cent spiral in complaints comprised police detaining persons for protracted periods without charging them.

"We told the IACHR that the security forces appeared to be fingerprinting and photographing young men of Kingston's inner-city areas under the pretext of the state of emergency.

The JFJ had initially supported the state of emergency but opposed its extension.

It also complained about allegations of extrajudicial killings by members of the security forces.

She complained that more than 100 children are still confined to the lock-ups.

She also said the organisation conveyed its concerns to IACHR about the potentially damaging effects of six crime bills which were enacted last year.

The human-rights activist contended that the bills limit the fundamental rights of Jamaicans.

Gomes said the only bright spot in the dismally dark human-rights environment was the establishment of the Independent Commission of Investigations.

She was supported by Tamara Muhammad, the senior legal counsel for JFJ, who listed several allegations of police excesses by the security forces, including the highly publicised cases of Mickey Hill and Ian 'Chen-Singh' Lloyd.

Hill was shot dead by the police along the Norman Manley Boulevard in Negril, Westmoreland, in November last year while police in Buckfield, St Ann, were caught on video beating and firing a shot at Lloyd shortly before he died in August.