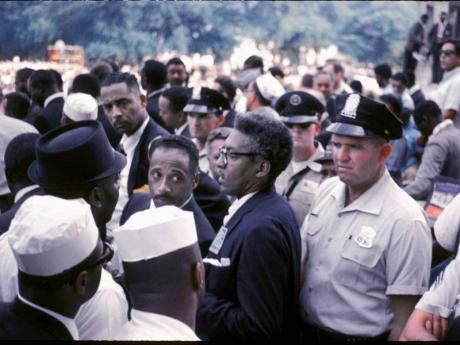 Bayard Rustin (centre, with glasses) on the steps of the Lincoln Memorial in Washington, DC, in 1963 for Martin Luther King's 'I Have a Dream' speech. - MCT

My column in late February celebrating the great Bayard Rustin's invaluable contribution to the civil-rights movement elicited some odd reactions.

I'll highlight two. First, from someone signing as 'Rosie':

"When I started to read your peace (sic), I was filled with pride - pride that someone understood the value of what the civil-rights movement was, and how it came to be. I was glad that someone remember that awesome man Mr Rustin and how he collaborated with Reverend King. I even learned some new facts about Mr Rustin. I hope that as you drink your morning drink, whatever it is that suits you, you're fully aware that you've destroyed the wonderful image of ... Mr Rustin. I remember the gentleman well ... .

What you did was to bring down Mr Rustin this morning by the remainder of your piece.

I don't know what your sexual orientation is, but you've called attention to yourself as someone who doesn't fully understand how our society things (sic). You should have let this man rest in peace."

My dear Rosie, I'm sad that my column offended you. It's a pity you seem to believe that homosexual orientation is some sort of abomination. Rest assured, I'm fully aware of how our society thinks. I'm trying to change that thinking by underscoring that greatness knows no sexual boundary.

Rosie, it's time to abandon the backwardness of much of the Old Testament and accept Jesus' teachings, as did Martin Luther King. King embraced (figuratively) a declared homosexual in a nation that thought then (and legislated) exactly as Jamaica does now. That embrace was of the "content of his character" and not the style of his private life.

It never ceases to amaze me how fixated readers can be. Often, improper motives are ferreted from the most innocent observations, and labelling replaces reason as the debating strategy of first resort.

"... This is based on revised history to make it more palatable to readers.

The Montgomery Bus Boycott was started by a black female professor named Jo Ann Robinson. Twelve years prior to the 1955 Montgomery Bus Boycott, Rosa Parks paid her fare at the front of a bus and, as she tried to board from the back, the driver drove off. In 1949, a black professor named Jo Ann Robinson sat at the front of an empty bus and was shouted at by the driver. Unlike Rosa Parks, Robinson tried to organise a boycott, but was told by the black community to accept her status in life.

Six years later, Robinson [got] her second chance to organise the boycott. She was the one, not Rosa Parks, who started the Montgomery Bus Boycott. She and her students distributed the flyers instructing blacks to boycott the bus service. King joined the protest later and praised Jo Ann for her heroic efforts."

Congratulations for highlighting the contribution of another largely unsung hero of the movement. However, there's no need to denigrate some contributions in order to praise others, and nothing in my column could be accurately described as 'revised history'.

The modern civil-rights movement was, in fact, triggered by Rosa Parks' brave defiance. It's also a fact that, before King became involved, the boycott was influenced by Jo Ann Robinson's leadership in arranging the immediate circulation of more than 50,000 pamphlets calling for a boycott. That swift reaction led some historians to suggest that Parks' action wasn't spontaneous, but a deliberate strategy to provoke overreaction from the authorities.

Regardless, Parks' refusal started it all. An inexperienced King was subsequently thrust into a leadership role which he might well have bungled if not for Rustin's peerless involvement.

And to those of you who felt the column insulted Marcus Garvey (one commentator actually wrote the title should've been 'Black America's history lessons' because "the history of black America is not the history of black people throughout the world ..."), all I can say is, get a life. Were I writing on Garvey, I wouldn't title it 'Black Jamaica's history lessons'. Black history is black history, wherever it happens. Garvey's legacy needs no protection from me. Like King, he's revered worldwide.

Bayard Rustin was a homosexual and a former communist. As such, his legacy is in danger of being lost for all time. History, as dispassionate as it ought to be, clearly needs writers like me to forcibly remind it that Bayard Rustin lived and left an indelible mark, despite bigotry's persistent, stubborn attempts to erase it.