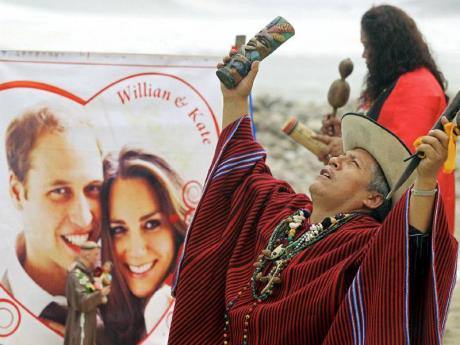 A Peruvian shaman performs in front of a photo of Britain's Prince William and Kate Middleton during a ritual to send good vibes to their royal wedding on La Herradura beach in Lima, Peru, yesterday. Kate and Prince William will marry on Friday. - AP

In some of Britain's Caribbean territories and former colonies, judges wear thick wigs of white curls in the tropical heat, sports fans follow cricket religiously and Queen Elizabeth II is the titular head of state. That doesn't mean people here will be breaking out the tea and crumpets to watch this week's royal wedding.

Interest in tomorrow's nuptials between Prince William and Kate Middleton is breaking down along generational lines in the ethnically diverse British Caribbean. It elicits excitement in some middle-age and older people who see the British royal family as a symbol of stability, and yawns from a younger generation more captivated by the latest dancehall reggae stars.

Numerous Caribbean grandmothers and mothers will stay glued to their television sets in much the same way people did during the 1981 marriage of William's parents, Prince Charles and Lady Diana Spencer.

Dozens of wedding-watching parties are planned on British-influenced islands in the Caribbean. Some restaurants are promising 'royal' goodies such as raspberry scones, crustless cucumber sandwiches and aromatic teas in honour of the couple. A few hotels are readying royal-themed music including God Save the Queen and Rule Britannia.

In Barbados, an island of 20 by 14 miles that is known as 'Little England' for its many colonial trappings, anticipation of the royal wedding at London's Westminster Abbey is high among sixty-something Carnetta Smith and her friends. Barbados has been independent of Britain since 1966.

"It will be nice to hear about a big, romantic wedding like that," said Smith, who plans to listen to a broadcast of the ceremony on the radio. "Plus, it's the future king and queen."

In the tiny British Atlantic territory of Bermuda, a charity for senior citizens is hosting an afternoon 'high tea' at a swanky hotel where attendees can view the BBC's royal wedding broadcast while snacking on cakes and savouries. Guests are expected to show up in their most conservative clothes.

"We're saying high-tea attire if so desired," said Cindy Swan, whose Project Action charity provides free transportation for seniors. "Ladies in hat and gloves and men can come in their top hats and morning suits."

In fact, the wedding has prompted Bermuda, the Cayman Islands, the Turks and Caicos Islands and others to declare tomorrow a public holiday.

St Kitts and Nevis and other sovereign Commonwealth nations have issued stamps to mark the royal engagement and wedding.

William and Kate are no strangers to the Caribbean. One of their global getaways is Mustique, a private 1,400-acre island in the Grenadines chain that has long attracted the British aristocracy and A-list rockers like Mick Jagger and David Bowie. The royal wedding guest list even includes the charismatic proprietor of Basil's Bar, a popular tavern on the island perched on stilts over the Caribbean Sea.

Reached by telephone on a hopping Saturday night at the bar, Basil Charles said he was "honoured and happy to receive an invitation" to the royal nuptials but didn't want to comment on the young couple's visits to his Mustique business.

Bermuda's premier, Paula Cox, who is attending the wedding with her husband, said she was charmed by the royal couple's story, especially Middleton's as a commoner-turned-member of the British royal family.

"As a woman, you feel a kinship with the idea that love has trumped the odds despite the differences in background. Many of us as women can empathise with the love story," Cox said.

Enthusiasm for the wedding was cooler - even non-existent - among some twentyish inhabitants of the Caribbean, where British royals such as Prince William fail to make an impression at all or are seen as an anachronism. Many younger Jamaicans burst out laughing when asked if they plan to watch the event.

"I have enough to get done without worrying about this wedding. It really is not a concern of mine at all," said Karen Ebanks, 26, a resident of Jamaica's capital who focuses most of her attention on home-grown culture such as the brash reggae-rap hybrid of dancehall music, which first became dominant in the mid-1980s.

Kandrea Williams, a 25-year-old Antiguan, said she wasn't even aware the royal wedding was taking place this month. She said many islanders have been preoccupied with Antigua Sailing Week, a popular regatta that's the biggest in the Caribbean.

Ultimately, the royal wedding is expected to be good for the Caribbean's vital tourism sector.

British officials expect several million Britons will head abroad, thanks to the timing of the wedding day - a holiday for most - between the Easter weekend and the May Day public holiday.

Wedding-watchers in the Caribbean said the TV broadcast will allow them a glimpse of the formal, pomp-filled world of the British monarchy that they only know from books and films.

In the former British colony of Guyana, 47-year-old hotel Manager Liz Rahaman said she plans to spend the entire day watching royal wedding coverage at home. For Rahaman, following the wedding will be her way of paying homage to the late Princess Diana, who died at age 36 in a 1997 Paris car crash.

"After all, we are talking about the future king of England and his wife," Rahaman said. "I resent the way they treated his mothzer, and so I will be following it all day, fully, on television."