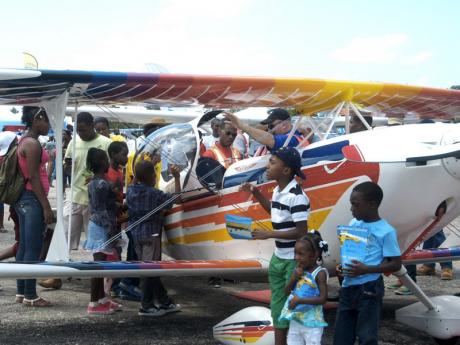 The show signalled the start of a two-day Easter weekend promotion, hosted by the Caribbean Aviation Training Centre (CATC) in collaboration with the Airports Authority of Jamaica (AAJ).

"This is just a taste of what we want to give the people in years to come, every Easter weekend. It is a community thing, it is a family thing and it is all about a career pathway for the youngsters. We are a dying breed, and I want to see more and more youngsters get involved in this (aviation)," Captain Errol Stewart, chairman and events coordinator for the Boscobel Air Show, told JIS News.

He noted that the event was planned with young people in mind, with the hope that they would find interest in aviation and seek to become pilots. He urged "kids who are interested in learning to fly" to call the CATC at 757-0211.

"We will answer your questions, we will invite you on tours and I will take them flying," Captain Stewart promised.

The day's activities were breathtaking, with stunt pilots showing off their aircraft, and giving the crowd a preview of what was to come on day two at the James Bond Beach.

All eyes were fixed on the skies, including those of United States' Ambassador to Jamaica, Her Excellency Pamela Bridgewater, Minister of Transport and Works Mike Henry, State Minister for Local Government Robert Montague and president of the AAJ, Earl Richards.

"A lot of people may have focused on the Ian Fleming International, and thought it was just for planes taking off and landing for those who can afford it, but this shows that the use of the aerodrome is (also) important in the development of the community, the area and the country," Henry told JIS News.

He commended Captain Errol Stewart on his vision in staging the two-day event, and thanked the stakeholders for making it a success.

When JIS caught up with Montague, he said he too was pleased with the turnout.

"The turnout is beyond expectations - for tourism, it is another attraction and it also opens up the airport to the international market, because we have the international media here and so it will put us a little bit more out there," he said.

With the atmosphere buzzing with excitement, patrons joined long lines to meet and greet the stunt pilots and tour aircrafts.

"I travelled all the way from Kingston, because I wanted to take my nephew. He is 12 years old and his ambition is to become a pilot," said Roslyn Stewart.

Stewart's nephew, Cosmore Lawrence, confirmed that the air show was a boost for him.

"I am excited and happy to be at the air show. I love airplanes and this will help me to achieve in life," he said.

St Mary resident, Glen Anderson, felt that the air show was good for the parish.

"This is one of the best things we have ever seen. A lot of things are happening in terms of development for the parish, and I am really happy to see what is going on," he said.

The stunt pilots were even happier being able to entertain Jamaicans.

"It is so good to be in Jamaica, I don't want to go home. This is a wonderful event and the people seem to be excited about what is going on," the world's number one helicopter stunt pilot, Roger Buis, said.

Stunts were also done by pilots such as Fred Cabanas, who is known internationally as "the man who leaves more smoke in air than the Marlboro Man himself"; Gary Ward, whose entire sequence is jam-packed with breathtaking gyrations; and Bill Gordon.

The event was staged to promote Brand Jamaica as an extreme-sport destination.