It's strictly business for Phillips 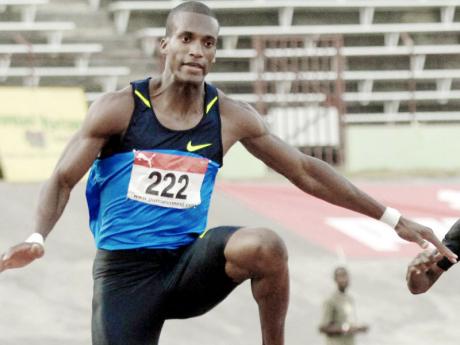 Haunted by a dismal performance - when touted as a possible medal winner he bundled the semi-final of the 400-metre hurdles - Phillips found it hard to tuck away the disappointment.

"It was the night after," he recalled. "I just wouldn't sleep."

Several weeks before Phillips had run a personal best 48.05 seconds to win at Jamaica's national trials - a time that would have been good enough for silver in Berlin and his first medal at one of track's two most significant competitions. But he mangled the semis. Badly.

"I made such a technical mess," he said. "I didn't accomplish what I set out to do in the race."

The sting of that result ripped into Phillips personally. But the fallout also spread beyond his domain. The total damage troubled him.

"The disappointment was not so much me," he said, "but it was disappointing others as well - people and country."

For Jamaican track fans it was a monumental shock. Phillips' display at the June 27 trials, despite his failure to get past the semis at WCA 2007 and the 2008 Olympics, had ignited their expectations. For a fleeting moment - before Bershawn 'Batman' Jackson bettered it by 0.02 of a second at the United States trials that same weekend - Phillips' time in Kingston was best in the world for 2009.

The former St Andrew Technical High School athlete appeared to be finally mastering one of track's most testing events, peaking precisely for the WCA. His steps between the barriers - vital, especially for a 6' 5" hurdler - were more precise. His speed was improving. He looked forward to running even faster at the WCA.

Yet it all unravelled miserably on August 16 in Berlin. Phillips "shuffled at the ninth hurdle." Less than 100 metres from home, he lost his rhythm. He never recovered.

"From that happened my race just dropped off," Phillips said.

He lumbered in fourth in 48.93 - 10th best for the two semis combined - well off a top-eight time required to contest the final.

Phillips couldn't revive his form the rest of 2009 either. Last season was a disappointment too.

Yet for Phillips, track is largely a means to the end of establishing himself in business. So he stepped beyond sleepless nights.

"He's gonna do it and when it's done he'll move on," explained his Jamaican-born coach Mark Elliott, a former outstanding distance runner at St Jago High.

He has hurdled Berlin's disappointment and taken a path to relaunch himself into world track prominence.

"It's not so much redemption as continuing on a goal," said Phillips, outlining his philosophy for Daegu and the 2012 Olympics.

"Failure is a part of succeeding. The goal is always the same. If you fall, you get up again."

Phillips concluded his approach to track needed an overhaul. From high school through college at Louisiana State University (LSU) in the US, the sport was never an obsession. Now he understands the significance of succeeding at the WCA and Olympics - track's showpiece events. The highest level, ruthlessly, demands more.

"Before, I had the amateur thing, running for fun," said Phillips, who turned 27 on April 22. "I really hadn't transferred as a pro ... not considering the business end of it. I allowed too much human element to come into it."

He realised he was not prepared for WCA 2009.

"During the whole time my fitness wasn't the best thing," he said. "I was just running mentally tough. So I was getting tired. I was still on a college programme ... I wasn't strong enough."

Hard changes followed. Phillips is no longer guided by college coach Dennis Shaver. Elliott, an LSU associate coach who once shared duties with Shaver, trains Phillips. The programme has been revamped.

"It's more working over distance," said Phillips, "getting the strength."

He believes his maturity has improved as well.

"I'm getting into a more understanding-of-the-business mindset," he added.

Elliott believes the expectations of the athlete at WCA 2009 may have been unreasonably inflated due to his performance at the trials.

"In my mind, he was still an up-and-coming athlete," the coach explained. "He knew he was getting better, but suddenly he was rising to the top. At the time it crept up on him."

The WCA result proved Phillips didn't handle those expectations. Elliott said his outside lane six draw in the WCA semis didn't help either, but admitted that was the hurdler's 'reward' for clocking a slow time - 48.99 - in the opening heat. The coach believes Phillips has reloaded.

"Whatever happened (at WCA 2009) he's learned from it," said Elliott. "He's so well versed on what he has to do now. He's getting back to basics."

That approach, Phillips hopes, will eliminate past mistakes. In 2010, Phillips said he "was running injured the whole year ... doing a lot of damage to myself." That, he vowed, won't happen again. His positive long-term outlook, however, has hardly been dented.

"My whole mentality towards success is that if you knock on the door long enough eventually it will open," Phillips said.

He's getting help for tendonitis in his knee, but Phillips is satisfied with his progress so far. There's no need to rush, even as Jamaica's trials (June 24-26) and WCA (August 27-September 4) loom. Phillips believes the pieces to success on the big stage are beginning to fall into place. But there is a way to go before his mental and physical preparations peak.

The coach has noticed the adjustment in Phillips' mindset. The 2011 focus is running 47.5 seconds. Other rewards are within reach.

"He's thinking, 'I can win some medals'," Elliott said.

Ironically, erasing the horror of WCA 2009 totally is not part of the plan. It has become a valuable tool.

"(It's) used to improve on what I've already done," Phillips said of his target. "No doubt I can do better."

Daegu, in the summer, will be the perfect place to prove it.