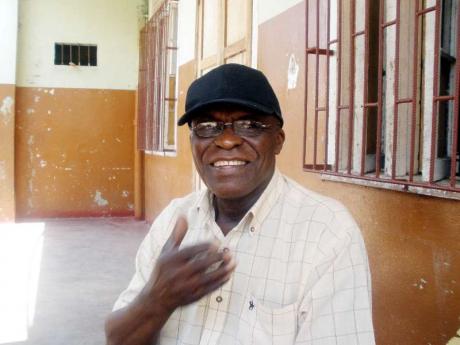 As I approached the Lennie Hibbert Hall on the Alpha Boys' School compound, the sweet sound of the classic, Schooling the Duke, by Alpha alumnus Don Drummond escaped through the windows. Inside, a surprisingly small group of 14 - small, given the big sound - was rehearsing under the watchful eyes and ears of band leader Sparrow Martin.

The band comprised two trumpets, two clarinets, one flute, three saxophones, two trombones, one keyboard, a bass guitar and a drum set manned by the tiniest drummer I had ever seen.

The drummer is 12 year-old Ardowho has been playing for five months. A two-year resident at Alpha, he loves the sound of the drums and looks forward to playing his favourite song, Swing Easy, by another Alpha alumnus, Dizzy Johnny Moore, in Alpha's upcoming benefit concert.

Martin, who has held this post for 24 years, said the band plays a crucial role in helping the boys shape a positive future.

"They know that when they join the band they have to come with a certain discipline," he explained. "Developing that discipline means there is a job for them out there when they leave."

Martin is a multi-talented musician who plays the trumpet, keyboard, drums and French horn, as well as the lesser-known euphonium and vibraphone. He has a unique way of deciding which instrument a boy will learn when he enters Alpha.

"I look at their features and see which instrument will suit them. Sometimes I get an inspiration. I go home and dream about the boys.

Then I come back and say, 'that instrument I put you on, that won't make you successful, you need another instrument'. Then when I change them, I know they will be great."

The first Alpha Boys' band was formed in 1883 and, over the decades, the school has produced hundreds of outstanding musicians who today are pursuing careers all over the globe, from the USA to Japan and right here in Jamaica. The school has also attracted many musicians who were drawn to the abundance of musical talent and collaborated with Alpha Boys on significant projects.

According to Harvard-trained musicologist and Guggenheim Fellow at the Massachusetts Institute of Technology, Dr Wayne Marshall: "Without Alpha Boys' School, it's safe to say that there would be no ska, for no fewer than five of the Skatalites - Dizzy Moore, as well as Don Drummond, Tommy McCook, Lester Sterling, and Rico Rodrigues - got their start at Alpha. Moreover, many of these performers would go on to play in the house band for Dodd's Studio One, where they contributed to many of the foundation 'riddims' of rocksteady and reggae, compositions which have been revisited and 'relicked' hundreds and hundreds of times in the decades since. Other studio mainstays and reggae innovators count themselves as alumni, such as Leroy 'Horesemouth' Wallace (inventor of the 'Rockers' rhythm, and lead actor in the film by the same name), and several of Jamaica's most popular vocalists, including Desmond Dekker and such dancehall stars as Johnny Osbourne and Yellowman, also received their musical pedigree at Alpha Boys' School."

But the story of Alpha Boys' musical heritage would not be complete without Sister Ignatius, the stern disciplinarian who served the school from 1939 until her death in 2003 with a profound love for the boys and commitment to their development. An avid sportswoman, Sister Ignatius coached the boys in cricket, boxing, table tennis and football, with the only proviso that they were never to beat her at any sport. She was also a saxophonist and avid musician and operated a sound system called 'Mutt and Jeff', which she used to expose them to all kinds of music.

"Sister would say 'music is music'," Sparrow recalled with a smile. "Every Saturday she would gather us and play jazz, classical and pop selections. She would tell us 'this is how you are to learn to play'."

It is not hard to imagine that Sister Ignatius would be very pleased on Saturday May 21, when the Alpha Boys' Big Band, comprising alumni and current students, will join a number of other bands, reggae and dancehall artistes to honour the school's musical heritage and raise $15 million for infrastructure improvements and new instruments.

Note: The concert, dubbed 'Let's do it for the Alpha Boys', is sponsored by MD Entertainment, the Rotary Club of Kingston and the Omega Element Band. It will be held at the National Indoor Sports Centre.