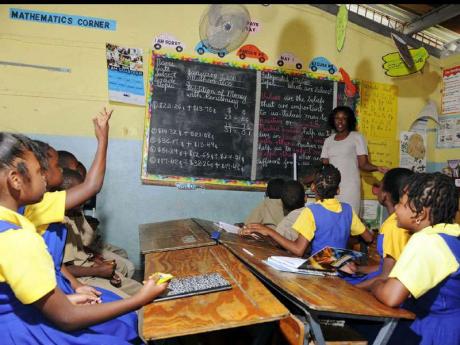 Students in class at Trench Town Primary School. Professional Jamaicans for Jamaica, a group of Jamaicans in the diaspora, has been providing free breakfast to children here. - Gladstone Taylor/Photographer

Through its connection to reggae greats like Bob Marley, Trench Town, the often volatile west Kingston community, has attracted hordes of visitors and non-governmental organisations offering help to residents.

Recently, a service-orientated organisation has turned its eyes to Trench Town. Professional Jamaicans for Jamaica (PJFJ), with members and linkages in Jamaica and overseas, has launched a breakfast programme at the Trench Town Primary School. It is free, and it has made a big difference in the lives of students attending the inner-city school.

It may just be breakfast, but according to residents, providing the day's first meal is a challenge for many.

The teacher explained that absenteeism at the school is directly linked to the students' nutrition woes. But things are changing. "Many of them didn't come, or come to school badly, because they don't have any lunch money. When some come to school, they don't eat breakfast and come crying and have a headache throughout the day," she said.

According to Francis, since PJFJ and other donors have been providing breakfast, attendance has improved .

"Even if they don't have any lunch, the breakfast is sort of heavy, so they can focus," she said.

Last Friday, the members of PJFJ served up a meal of callaloo, mixed vegetables, dumplings, yam, and bananas. On other days, offerings include stewed chicken and franks and beans. Students get a cup of mint tea or Milo with their meals. To some, the food is modest, but for many of the students at Trench Town Primary, it is the most nutritious thing they will eat all day.

Christine Whitely is an activist who is based in the community. She says that each morning, students will make the trek to her home to ask for lunch money. A passionate but overwhelmed-sounding Whitely said that the school's nutrition issues are steeped in unemployment.

"Many people aren't working in Trench Town, so they can't feed their children. Some are trained but they can't get any work. What's the point of reforming these youths if we can't offer them anything?" she asked. "Some pickney go bed hungry an don't eat for days. It bleed mi heart as a resident fi see how some of the people live."

According to Whitely, criminal forces are cashing in on the destitution of residents, especially the youth. "We need more breakfast programmes because the gangster dem know dem hungry an a recruit dem." Whitely is a member of the Positive Impact Youth Club and Caring and Compassionate Senior Citizens Association.

Senior development manager at PJFJ, Sherene Johnson, said that her team decided to assist the school after members of the group's Facebook page responded to a Gleaner article posted on the group's page in January. The article was titled 'Trench Town Primary fights the odds' and featured the school's principal, Merline Sewell-Sullivan, who explained that the school had been robbed and its GSAT prospects were at risk.

"We had to help, and with donations from members, we have been providing meals for them. The brain will not function without food, and they need to have food to focus in class," said Johnson.

Johnson said that the group put on treats in Tivoli Gardens, Albion, and the Granville Place of Safety. PJFJ also stages a scholarship competition, an essay competition, and has a schoolbag programme.

Johnson says that the group has 1,700 members, many of whom are active on its Facebook page. She says that PJFJ funds its projects through donations from membership, especially those abroad.

PJFJ hopes to address the financial needs of low-income Jamaicans through engaging communities like Trench Town, which, they hope, will create a positive chain reaction.