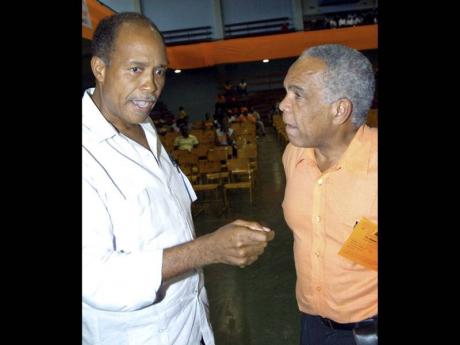 In this 2005 file photo, Dr Karl Blythe (left) chats with Omar Davies, then minister of finance, at the People's National Party's 67th annual conference at the National Arena. - File

Dr Karl Blythe, a former Cabinet minister in the People's National Party (PNP) administration of the 1990s, has accepted that his government should be blamed for the financial sector meltdown of the period.

"I personally apologise to all those who may have suffered during this financial crisis," Blythe said in a release yesterday.

"I further apologise for any mistake made by the Government, of which I was a part, which resulted in the suffering of any Jamaican," added Blythe.

According to Blythe, the main problem was that the PNP administration, led by P.J. Patterson, with Dr Omar Davies as finance minister, "erred significantly in maintaining the high interest rate for much too long a period".

Blythe, who failed in his bid to lead the PNP after Patterson stepped down in 2006, said the high interest rate introduced by the Government was acceptable, but it was the length of time that it was maintained.

"The Government, of which I was a part, introduced a high interest rate policy, which most of us will agree is an effective tool to achieve certain objectives, such as tightening liquidity to discourage currency speculators, thus protecting our exchange rate and controlling inflation," said Blythe.

The former government minister took special offence to the classification of FINSAC debtors by members of the previous government.

"So we now have what Dr Davies and others are calling bad debtors. Who are these bad debtors? They are our entrepreneurs, simply mothers and fathers borrowing money to assist their children through school and using their matrimonial home as security.

"These persons now being referred to as bad debtors were good clients of the banks, servicing their loans according to contracts they signed with the banks, at interest rates in the high teens and mid-20s, and doing a good job of being a good customer of the bank," charged Blythe.