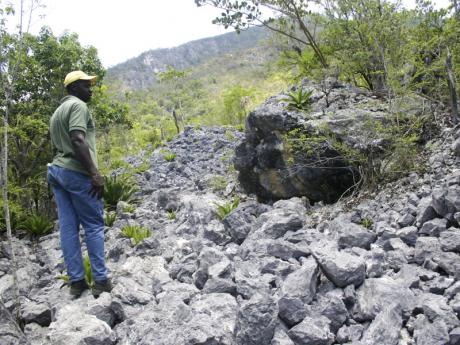 Horace O'Gilvie is convinced that these rocks are evidence of a volcanic eruption that probably triggered the land slippage that destroyed an entire community in 1692. 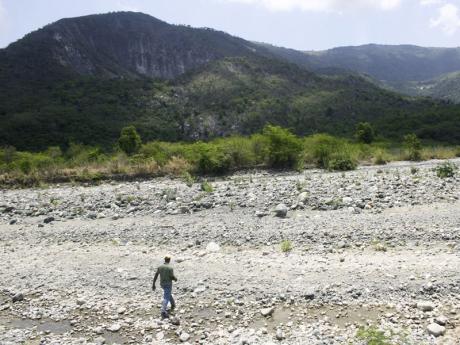 Horace 'Patrick' O'Gilvie sets out on the long and arduous journey to Judgement Cliff which involved crossing the river. 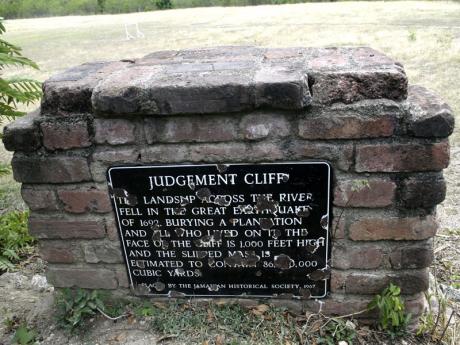 The plaque detailing the land slippage that destroyed an entire plantation is barely visible from its location on the grounds of the community centre.
1
2
3

LLANDEWEY, St Thomas: IN 1692, the year that an earthquake destroyed Port Royal, then Jamaica's capital, another natural disaster of catastrophic proportions rocked an area of St Thomas in the vicinity of Llandewey, which almost 350 years later bears testimony to that cataclysm in its name - Judgement Cliff.

A plantation and all who lived on the cliff were buried by the massive land slippage during an earthquake, and according to a commemorative plaque mounted by the Jamaican Historical Society in 1967, the face of the cliff is estimated to be 1,000 feet and the slipped mass containing 86 million cubic ft.

While some Llandewey residents, including community activist Horace Kirkpatrick O'Gilvie known as Patrick, are familiar with the story, it would seem that the local legend is largely unknown outside the parish. However, even for many locals, Judgement Cliff remains nothing more than a story since they have never ventured to get a close-up. For some it is fear of the unknown, while for others the daunting challenge of the terrain is a deterrent.

For the brave like Patrick who made the trek on many occasions, the fascination grows. "You have a spring up there called Brukweh Spring where the hotter the day gets, the cooler the water gets," he shared. He believes that the land slippage was triggered by or in some way associated with a volcanic eruption and points to the predominant type of rock found there in support of this theory.

The area en route to Judgement Cliff is also dotted with different species of ferns and surprisingly for me, cherry and pomegranates, as well. On the way back, we encounter two brown owls and manage to steer clear of the pod variety of cow itch. Patrick is convinced that the potential as an ecotourism site is immense. His plans would include the establishment of a line of baths or cool-off spots where hikers would be doused with water during their trek.

Lamenting the fact that Judgement Cliff has remained for so long a well-kept secret, he points to the state of the plaque mounted on the grounds of the community centre, where it is not easily visible, and is also at risk of being covered by dirt. Having lost its roof during heavy rains, the building was vandalised, and has since been neglected. Since then, the community of Mount Sinai in Llandewey where weekend cricket matches and other exciting sporting activities were once a way of life, now seems to have fallen off the map.