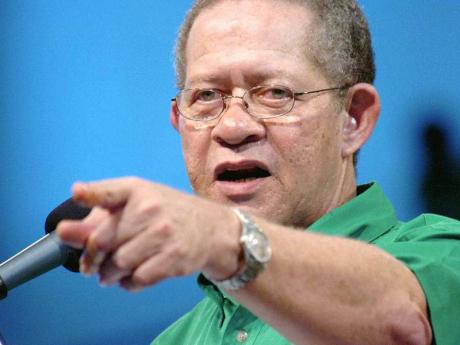 In his first public comment on the United States diplomatic cables acquired by WikiLeaks and now being published by The Gleaner, Prime Minister Bruce Golding yesterday blasted this newspaper, claiming the media house is harassing his government.

Golding made the comments during his keynote address at the opening ceremony of the Jamaica Labour Party (JLP) Area Council Four Regional Office at the Montego Freeport Shopping Centre in Montego Bay, St James.

"We have suffered from so many detractors and distractions. We have scored a few goals on ourselves. We have had people who've moved the goalpost on us from time to time.

"There is a sustained effort being made by the power brokers of North Street to harass the government. It is not surprising. It comes from a mentality that ascribes to itself not just a right, but a duty to assist parties to form government and to take parties out of government," the prime minister said.

Golding told his supporters that the newspaper's use of the diplomatic cables was unethical as they were "stolen property" which belonged to the United States.

"It has some historical antecedents to it that I don't want to probably speak about today. But Daryl Vaz made one comment and I only want to add one thing to it, we don't know what is in this WikiLeaks arsenal that is being published.

"We know what has been published already. They represent, of course, internal communication within the United States at a diplomatic level," Golding said.

"I know that in law in Jamaica if the police find me with stolen goods, the fact that I didn't steal it - it is you who steal it and came and shared it with me - I am still guilty. And the fact of the matter is that this information, which is internal to the United States diplomatic network, was stolen. The power brokers of North Street don't have any compunction about publishing," Golding said.

The prime minister said the newspaper was being selective with the information from the cables it published and continued to unfairly target persons within his government and some members of the Opposition, whom the upper echelons of the entity did not like.

"But I say to you, as a matter of fact, that some of the WikiLeaks cables, they deal with a lot of things and a whole assortment of people, including critical power brokers at North Street too.

"Communication internal to the US network that reflects comments and statements made by perhaps the most senior power broker of North Street and yet instructions were clearly given: 'Take those out'," he charged.

not a JLP or PNP thing

Golding continued: "And I am not talking about personal matters, I am talking about matters which involve the state because those power brokers have, in the past, held positions to do with matters of state," Golding said.

"And there is an agenda at work, that if it impacts on the power brokers themselves, then that is not to be published, it is to be suppressed. If it has to do with persons the power brokers regard as their favourites, in both parties - You see it is not a JLP or PNP thing," added Golding.

The prime minister said there were elements within and outside Jamaica who were bent on ousting his party from political power and that the members would have to work hard to ensure they do not succeed.

"It is something that we are going to have to talk to the people on the ground about. We mislead ourselves if we believe the vote is the ultimate lever of political power.

"There are other forces at work - domestic and foreign - and the challenge is going to be how to organise ourselves on the ground, how we build that machinery, how we communicate to those voters to make sure that it is strong enough, sturdy enough and resilient enough to withstand the forces that feel that they have their right of the future of the governments of Jamaica beyond the single vote that each of us has."