The legend of Jack Mansong 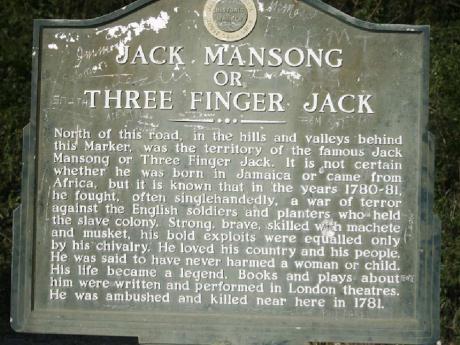 Erected by the Jamaica National Trust Commission, this historic marker speaks to the softer side of a man who struck fear into the hearts of the colonial powers and who, in death, inspired many literary works. - Photo by Christopher Serju 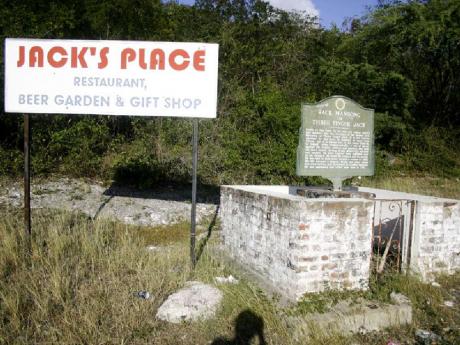 While it is responsible for maintenance of the historical marker which pays tribute to the memory of former slave-turned-guerilla fighter, Three Finger Jack, also known as Jack Mansong, researcher Georgia Rookwood says the Jamaica National Heritage Trust knows nothing about the sign at left advertising a number of services. - Photo by Christopher Serju
1
2

A slave who also became known as Three Finger Jack, his exploits as a guerilla fighter, starting in 1780 until his death in January 1781, sparked a wave of literary works which kept his legend alive well beyond the shores of Jamaica.

The marker, mounted in 1978, says of Jack, in part: "Strong, brave, skilled with machete or musket, his bold exploits were equalled only by his chivalry. He loved his country and his people. He was said to have never harmed a woman or child."

Located below the hills where his hideout was, the marker paints a positive but inadequate picture of a man whose mystique led to him being held in fear and awe. Describing him as a "folk hero-villain", L. Alan Eyre, writing in the Jamaica Journal Volume 7, Number 4, in 1973 said: "It is a fact that more 'biographies' of Jack have been published than of any West Indian before or since - somewhere approaching 20 in all, almost all written in Britain and almost all anonymous!"

In the article titled 'Jack Mansong Bloodshed or Brotherhood', Eyre notes: "Not only did books about him become popular, and one or two are known to have been bestsellers in Britain, but a pantomime of his life had the rare distinction of being a sensation at Covent Garden, Haymarket and Victoria theatres in London. This musical Obi - or Three Finger Jack - had a run of at least nine years!"

Continuing, the author notes the lingering impact of this rebel whose origin remains shrouded in uncertainty more than 310 years after his death. "Even in the nineteenth century, Jack's hideout was still being prominently displayed on maps of Jamaica, including the first official detailed survey of the island in 1802."

Who was Jack Manson? Where was he born? These are among the questions that continue to haunt students of history fascinated by the legend of Three Finger Jack.

Described as "the terror of Jamaica", the exploits of this slave bandit-outlaw struck fear into the hearts of many up to 50 years after his death. The truth about his life seems to have been overtaken by fanciful stories, with the many and varied accounts making it difficult, if not impossible, to untangle the facts from the legend.

Even the veracity of the name Mansong is in doubt, appearing as it does in print for the first time almost two decades after his death. Given his slave status, Jack's African ancestry is assured, but where in West Africa did his forbears live? Gambia seems the likely place. Was he born in Jamaica, or was he a victim of the Middle Passage? The 'history' suggests that he was linked to a plantation in St Mary from which he escaped to enjoy freedom on his terms.

Believed to be a giant in stature, standing close to seven feet tall, he became known as Three Finger Jack after losing two digits in a fight with a Maroon known as Quashie, who would eventually be credited with killing him. Alone and unarmed, he reportedly had time only to seize a machete before being shot three times, when attacked by Quashie and six others, according to Eyre's account. Mortally wounded, Jack threw himself off a precipice and Quashie followed. The two engaged in hand-to-hand combat with Jack putting up a good fight before succumbing to Quashie.

Feared as much for his fighting skills as his obeah, Jack, who in life was the epitome of the indomitable spirit of a freedom fighter, was reduced to an ignominious end. Decapitated, his head was put on a pole and carried by his proud victors, followed by a crowd, celebrating as they marched first to Morant Bay and then to Spanish Town to collect the reward of £300.

Next time you drive out to St Thomas from St Andrew be sure to look for the historic marker in honour of Three Finger Jack which researcher Georgia Rookwood says is maintained by the Jamaica National Heritage Trust. You might use the opportunity to reflect on this observation by Eyre.

"The ultimate influence of the Jack Mansong stories upon the British social and religious climate of the early nineteenth century will never be known. However, it is interesting to know that 'Three Finger Jack's little guerrilla' was in the Blue Mountains nearly two hundred years ago and was widely seen as a warning that in human, racial and national and international relations there is only one choice: bloodshed or brotherhood."