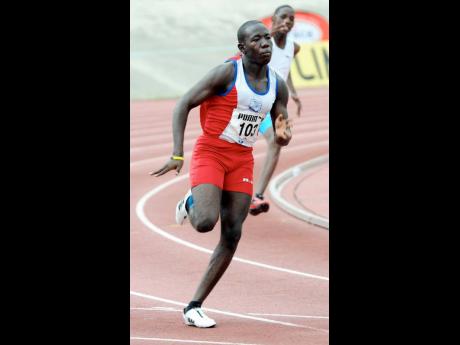 THE country's top junior athletes will be in action this Saturday and Sunday inside the National Stadium at the Jamaica Athletics Administrative Association/ Supreme Ventures Limited National Junior Championships, as they will be seeking places on the national team for two major meets - the World Youth Championships in Lille, France which will be held between July 6-10, and the Junior Pan Am Championships, which will be held in Miramar, Florida between July 29-31.

There will be a notable absentee at this weekend's meet, as Carifta Under-20 100 metres male champion and world youth leader in the event, Jahzeel Murphy, will not be in action. Murphy, who won the 100 metres at the Carifta Games this year in Montego Bay with a world-youth leading time of 10.27 seconds, is recovering from a quadricep right-leg strain suffered at the Carifta Games during the running of the Boy's Under-20 4x100 metres relay. Murphy, who had to miss all major junior meets last year due to a right-hamstring injury, had returned this season, back in top form as, besides winning at Carifta, he was also successful in the Class 1 event at the ISSA/GraceKennedy Boy's and Girl's Athletics Championships.

The Bridgeport High School athlete is, however, recovering well and, although he will be absent from the meet this weekend, he is expected to recover in time to compete in both meets in July.

"I have been in training and I am doing a lot of drills and form running with a lot of strength work, but my doctor told me that I am not 100 per cent ready to compete as my quadricep needs to get stronger, and it will not be wise to risk my injury so early as in a few weeks time I should be able to get back to full fitness," he said.

Murphy also stated that he felt the twitch in the early stage of his relay event, but did not want to stop.

"I felt a twitch early, but because I was representing my country I did not want to stop because people would have said that I was selfish, seeing that I had won the 100 metres," said Murphy, who said he now regretted that decision.

Murphy said he was looking forward to his clash with World Youth Olympic 100 metres champion Odean Skeen, who showed good form recently, after recovering from an injury to clock a personal best of 10.41 seconds at one of the JAAA All-Comers Meets.

"I was looking forward to compete once again with a fit Skeen but, despite this not happening at the National Championships, I am very confident that it will happen in France," he said.

Murphy's coach at Bridgeport High School, Carl Page, is confident that his charge will be ready for the World Youth Championships.

"There is still soreness in his injury, and we don't want to risk it by letting him compete this weekend, as the doctor has stated that he will be okay and he just needs the extra rest from competition to get stronger," said Page, who stated that his athlete is doing a lot of plyometric exercises.