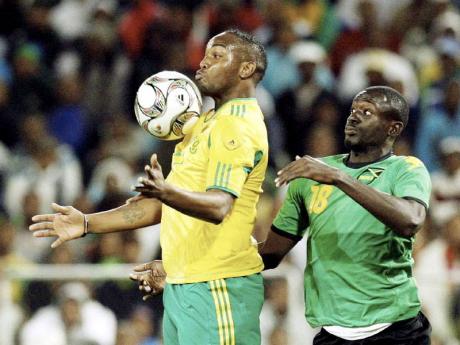 Dicoy Williams (right) in action for Jamaica in 2009 against South Africa in a friendly match at the Free State Stadium in Bloemfontein, South Africa. At left is South Africa's Benni McCarthy. - file

ADAPTING to a new system calls for some amount of adjustment. It didn't take long for Dicoy Williams to realise that after transferring from local Digicel Premier League outfit Harbour View to United States' Major League Soccer.

The Jamaican central defender, now with the Reggae Boyz squad for the 2011 CONCACAF Gold Cup, admits having a hard time at the outset, when he had just joined up with Toronto FC just ahead of this season.

"The first couple of weeks were kind of tough, but that was the hardest part of it, I had to work very hard to get back into the team," he admitted.

"It's a very different situation, it's how you adapt to it because if you don't adapt fast enough it's going to be a big problem, so you've to adapt fast and try to understand the system that they are playing and know how to move off the ball," Williams said.

"They play in a system so you've to always be in the right shape, so I think that's one of the biggest changes in my career, to know that you've to play that disciplined role - to know where you've to be at that point," he added.

Transitioning not only had to be quick for Williams, but his teammates too, as they have a new coach, former Dutch winger Aaron Winter, who is implementing his style on this team.

"We've a Dutch coach, we're playing a European style, so it's a different style of football that is played here in the US. You've to try and understand the formation to the fullest," said Williams. "We're gelling now. It's not great but we're not doing bad. We're in a nice position from which we can move forward and make the play-offs."

The 24-year-old is enjoying the move allround.

"The fact that I've moved overseas and is playing in the US, it's a great feeling. It's a different environment and approach," he pointed out. "To play in the MLS is a start, but I have dreams to play in Europe, that's the main place where I want to go. The MLS is helping to get me exposed to the professional level, it's a learning process."

That process has spilled onto a new project, the CONCACAF Gold Cup where Jamaica faced Grenada at in their opening round encounter at the Home Depot Centre.

When that is over, he will return to his club, looking to fulfil their transition.

"I want to be one of the players who will lift Toronto FC to the playoffs for the first time," he said. "I think the turnaround will come when all of the players get to know each other better. I think we're going to have a good season."

NOTE: Jamaica will next play Guatemala in the CONCACAF Gold Cup at the FIU Stadium in Miami on Friday, June 10 before facing Honduras in their final preliminary round Group B game at the Red Bull Arena in Harrison, New Jersey on Monday, June 13.