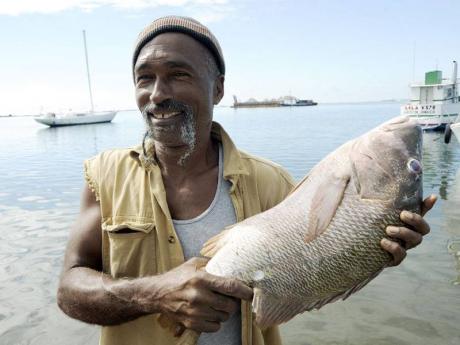 Clement Deslandes, vice-president of the Universal Negro Improvement Association, shows off a 10.5lb reef snapper shot with a speargun at the Harbour Head Beach in St Andrew in December 2010. - File

Destruction of Jamaica's coral reefs could affect the livelihood of more than 100,000 people and potentially eliminate US$23 million of income earned from vacationers traditionally drawn to local beaches.

A new study also finds that Jamaica's reefs are worth US$34 million to the local economy, but was somewhat critical of the lack of investment to safeguard the coastal ecosystem, which is integral to the formation of sand and beaches and repopulating the marine fish stock.

The benefits from the coastal ecosystem through tourism, fisheries and coastal protection have been undervalued and at times even ignored in Jamaica, according to researchers.

The analysis for Coastal Capital: Jamaica was carried out by the World Resources Institute (WRI), the University of the West Indies' Marine Geology Unit, the Mona GeoInformatics Institute , and The Nature Conservancy.

"Coral reefs provide a critical habitat for Jamaica's fisheries that support thousands of fishermen and provide a range of employment opportunities to many others across the island," said research analyst Richard Waite, in a press release announcing the availability of the report.

"Further loss of Jamaica's reefs could potentially lead to the loss of thousands of jobs," said Waite, a lead author for the study.

This report follows another released earlier this year by WRI, Reefs at Risk Revisited, which found that all of Jamaica's coral reefs are currently under threat, with more than 60 per cent in the high to very high categories.

The Coastal Capital: Jamaica study found that reef-related fisheries support between 15,000 and 20,000 active fishermen and contribute directly and indirectly to the livelihoods of more than 100,000 persons, and make an overall contribution of 0.3 per cent of total annual GDP. Employment through fishing usually comes in the form of wholesale and retail vendors, processors, gear makers, boat builders and ice suppliers.

Data from Statin that was analysed in the report show that in the period 1996-2005 there was a clear downward trend in the value of the contribution of the fisheries sector to the Jamaican economy - from US$65.8 million in 1995 to US$34.3 million in 2005.

The causes were identified as overfishing, fishing during breeding season and the presence of a carnivorous species, the lionfish.

The assessment of the impact of reef degradation and beach erosion on tourism showed that 70-80 per cent of tourists care strongly about the presence of beaches in their visits to Jamaica, with Negril, Montego Bay and Ocho Rios, the three major resort destinations.

"For the first time, we have modelled the link between reef degradation and beach erosion to assess the economic impacts on tourism," said Benjamin Kushner, research analyst at WRI and one of the authors of the study. "Our findings clearly demonstrate how Jamaica's coastal tourism is tied to the health of its coral reefs."

As a result of the threatened beaches, Jamaica could lose tourist traffic of about 9,000 to 18,000 visitors, the study warns.

"Investing in the maintenance and enhancement of these reef-related benefits - and preventing future losses - is thus an important investment in the health and sustainability of Jamaica's economy," the study concludes.