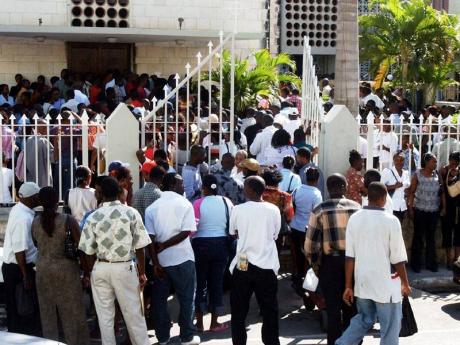 In this 2005 photo, hundreds of farm-work applicants gather at the St Paul's United Church in Montego Bay, St James, hoping to be selected for the programme.

The Government is now considering major changes to how the farm-work programme operates based on suggestions from the United States government which made it clear that it was not pleased with some aspects.

The Gleaner has learnt that more than two years ago, the US Embassy in Kingston expressed concern that the way the system now operates leaves it open to fraud and cronyism.

According to a 2009 diplomatic cable, embassy officials were worried that the system of allowing Jamaican farm workers to enter the US without visas was "conducive to corruption, political favouritism, fraud and potential threats to US national security".

In the note it fired off to Washington, the embassy argued that Jamaica was

"(We) believe that this loophole raises troubling national security and fraud-prevention concerns and should be rectified," said the cable.

"Post recommends that the Jamaican H2A programme (farm work) should be reconstituted so that applicants must go through the same visa interview process that … applicants in other countries currently undergo," read the cable.

It pointed out that applicants for non-agricultural work visas worldwide are checked against criminal and watch list databases developed by the US and argued that the practice provided a safeguard to prevent persons with serious criminal histories or terrorist connections from entering the US through the farm-work programme.

The cable said given the importance of remittances to the Jamaican economy, the US government should brace for "strong resistance from the Jamaican Government to this proposed new visa requirement".

However, the embassy said in its defence, Washington could counter that Canada, which has twice as many Jamaican farm workers, instituted a similar visa requirement

Embassy officials were also critical of the system used by the Ministry of Labour to select candidates for the farm-work programme, charging that there was the potential for it to be used to gain political support.

The cable noted that in an April 2009 meeting, it was told that the Ministry of Labour issues thousands of application forms to members of parliament, other political and community leaders, pastors and training institutions to be distributed to persons interested in going overseas for farm work.

"The pool of potential applicants for these relatively lucrative employment opportunities might be limited to political supporters, congregants and acquaintances of the card distributor in order to garner votes and political support," the cable warned.

"Clearly, the US government should not allow its own guest-worker programme to be used in such a potentially partisan manner," one embassy official added as a footnote attached to the cable.

Responding to the cable, Labour Minister Pearnel Charles told The Gleaner that the proposed changes were being discussed at the level of the US State Department and the US Department of Labour.

However, Charles, whose ministry has responsibility for the programme, said the changes being sought in Washington were not related to any security concerns.

Charles failed to address the allegations that the programme was open to political cronyism.

"What it is based on is that a number of agencies in Jamaica and elsewhere are collecting money from people for work in America which the State Department objects to," Charles told The Gleaner in response to a concern raised in another cable.

"It is more a consideration that people should not be paying for jobs in America rather than any security (concerns)," Charles continued.

The Jamaican farm-work programme has been in existence for decades, providing employment for more than 12,000 people annually.