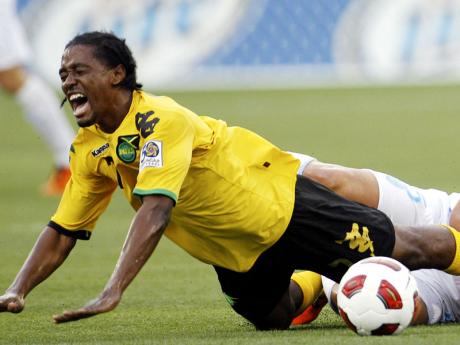 JASON MORRISON is turning out to be a real asset to the Jamaica senior football team at the CONCACAF Gold Cup tournament, due to his versatility.

With regular sweeper and captain Shavar Thomas rested for the Reggae Boyz's last Group B preliminary fixture against Honduras, Morrison, the central midfielder, was given his skipper's role to play.

"No, never," responded Morrison when asked if he had ever played the sweeper position before. "It's the first time in my entire career."

"At first I was surprised, but afterwards I just said I can play because it's a similar position to central midfield. It wasn't a difficult task."

Similar sentiments were expressed by Whitmore.

"I don't see any difference with the central midfield and around the back there," the Jamaica coach said. "Jason has been outstanding throughout the whole tournament. So far, Jason has played three 90 minutes without even a yellow card. Jason has done wonders for the team."

Thomas was benched because he was on one yellow card and with the possibility of a second that would have kept him out of the more important quarter-final fixture, against the United States at the RFK Stadium tomorrow, the Theodore Whitmore-led coaching staff made their decision.

All told, Morrison was among six changes to the starting unit for the final group game against Honduras, in a squad that is already short on numbers. The official quota for the tournament is 23 and the Jamaicans now have a 19-man roster.

Tyrone Marshall was released to join his Major League Soccer club and cannot be admitted back into the squad, according to tournament rules; Ian Goodison was dropped for disciplinary reasons, after failing to join the squad for a pre-tournament training squad in Brazil; Kavin Bryan suffered a broken leg; and Dicoy Williams was yesterday released with a knee injury.

Interestingly, with the exception of Bryan, a striker, the other three are central defenders, adding more impetus to Morrison's multi-dimensional capabilities.

"As the last person at the back of the field you've to be more cautious, read the game more than when you're in central midfield and try to cover the two defenders in front a lot," Morrison assessed.

"You've to do a lot more talking because you've to organise the players in front of you and show them the positions to see the danger from early. So there's much more talking at the back of the team than at midfield," added the 27-year-old, who says "playing in the World Cup is my main goal ... because it's the highest level in football."

Morrison started his club football at Portmore United, has had trials at Leeds in England where securing a work permit has blocked his chances and played professionally in Hungary, Belgium and now Norway, where he represents Aalesunds.

"At the moment, my team's doing very well in the league, we're fourth, just three points off the lead," he admitted. In the first year I won the Norwegian Cup with Strom ... at the moment they brand me as one of the best midfielders in the league, my experience there so far is very good and I'm enjoying it."

He never enjoyed playing in Hungary.

"I didn't enjoy playing football in Hungary, that's the truth. The fans are not for football," he said, quite bluntly. "Those people they don't love football, they just come to criticise and make fights and stuff like that. At some of the games there's more police than fans."

It's an experience totally opposite to Belgium.

That type of toughness has prepared him well for a role that shows another side to his game, given that he also played excellently as an attacking midfielder at Portmore.

Morrison added: "I've been in the team for a while now so I've a lot of experience, so that's a big part of it. Even at my club, I've been one of the top players so far this season, the experience speaks a lot for itself and I'm just confidently playing football at the moment."

It's the kind of optimism that has made him an asset to the Jamaica team at the Gold Cup.