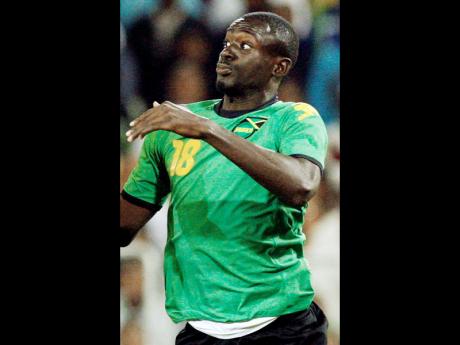 CENTRAL DEFENDER Dicoy Williams lost his battle with a knee injury and disappointingly parted ways with his Jamaican teammates at the Marriott Key Bridge Hotel where they are based here, as he departed the CONCACAF Gold Cup yesterday.

The 24-year-old said his goodbyes to teammates boarding the team bus, as they saddled up for training at the RFK Stadium in Washington where they will tackle the United States in a quarter-final encounter tomorrow.

"I feel very bad within myself to know that I couldn't be part of a team to win the Gold Cup, but it's just life, it's football, things do happen in life and you just have to take what happens and move on, it's just life," a dejected-looking Williams said.

"It's a great chance, we're in the quarter-finals, our hopes are very high and the players are training very hard and the coaches are doing a very good job, so I think we have a good, good chance to win against the US," Williams continued. "The spirit is nice, I'm feeling so sad to go. Even though I'm injured, I still wanted to be with the team ... the friendship and all I'm going to miss all of that."

"Dicoy is an integral part of the team. We've been short all tournament and to lose Dicoy is another blow," said Theodore Whitmore, the team's head coach. "We're down to 19 players, the most important thing is the players know the situation, they know what they have to do and all they have to do is go out there and do it."

Turn for the worse

Williams, who joined MLS team Toronto FC from Harbour View this season, got injured as he tackled an opponent at the fifth minute in the Reggae Boyz's second Group B match, against Guatemala, at the Florida Inter-national University in Miami, last week Friday, when the Jamaicans won 2-0.

The defender was immediately substituted and has not trained with the Jamaican outfit since.

He had been receiving treatment, but appeared to take a turn for the worse. He tried jogging during Wednesday's training session in DC and had to stop before receiving attention from physiotherapist Juan Camargo Jr After the team returned to their hotel base, Williams was taken to hospital, where a Magnetic Resonance Imaging (MRI) scan was done on the area.

The decision to discharge the player was arrived at yesterday afternoon.

"We thought at first he would've needed immediate radiographic study, MRI, but the night he was standing without any problem, walking without a limp," explained team physician, Dr Carlton Fraser.

"The following day he had some swelling, lateral, of the right knee, which suggested it had an involvement with the collateral ligament and we decided to watch him, and he continued to improve. But he had complaints of pain and though he was not covered with any allergies, we suggested pain therapy.